The House of Commons trade committee will hear nearly four hours of testimony from representatives of metals and auto companies and their unionized workers. On July 1, Canada’s retaliatory tariffs against the U.S will kick in 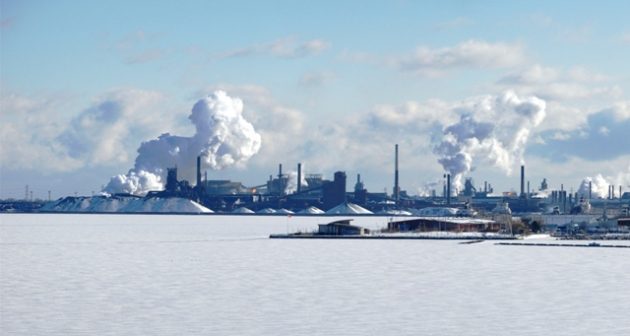 Metals tariffs are a big blow to cities like Hamilton, Ont. PHOTO: MarcusObal, via Wikimedia Commons

OTTAWA—The House of Commons trade committee will be back at work later today with a special meeting that has one major aim—demonstrating the broad economic pain of the Trump administration’s crushing steel and aluminum tariffs.

The committee will hear nearly four hours of testimony from a dozen witnesses from representatives of metals and auto companies and their unionized workers.

The meeting will bring a number of MPs back to Parliament Hill, uprooting them from their ridings one week after they left the capital for the summer recess.

Liberal MP Mark Eyking, the committee chair, said the meeting represents a show of solidarity aimed at Americans, as well as chance to measure the negative impact on Canadian and American workers from the tariffs.

On Sunday, Canada’s $16.6 billion worth of retaliatory tariffs on the metals—as well as dozens of U.S. consumer goods—will kick in, sparking what many see as a summer trade war between two of the world’s most integrated trading partners.

Eyking said he’s spoken to American diplomats in Ottawa, and he knows they will be watching carefully.

“We all know we’re in for tough slugging here,” the Cape Breton MP said in a telephone interview before flying back to Ottawa.

“I’m hoping it will show the scenario of what’s going to happen south of the border.”

Flavio Volpe, the president of the Automotive Parts Manufacturers’ Association, said the big worry is the possibility that Trump will impose a 25 per cent duty on all cars entering the U.S.

The U.S. Commerce Department is investigating the possibility of that tariff, which Volpe said would destroy the economies of several Canadian provinces and U.S. states.

“Trump won’t care what happens in Oshawa. But I will point out it will happen in Michigan, Ohio and Pennsylvania—all the states that delivered Trump the presidency.”

Conrad Winkler, the president of the Chicago-based North American steel giant Evraz, will express his opposition to Trump’s tariffs in no uncertain terms to the committee.

“We are disappointed in the administration’s decision to impose tariffs on U.S. steel imports from Canada. Steel trade between the United States and Canada is fair, balanced and uniquely integrated,” a spokesman for Winkler told The Canadian Press in a written statement.

The company’s Canadian operations and its exports to the United States “support thousands of good-paying middle-class jobs in North America.”

The committee appeared to have been done its work for the summer, but following its meeting last week, a group of Conservative members pushed for a comprehensive meeting that would discuss the impact of the tariffs.

Larry Rousseau, the executive vice president of the Canadian Labour Congress, said his message to the all-party committee boils down to this—the government needs to come up with a support package to protect the more than 30,000 workers in the country’s steel and aluminum industries.

“A trade war is a trade war. But we need to keep our industry intact,” Rousseau said.

“We have to tell the public this is going to be very costly, when we talk about supports for industry. That means the government is going to have to borrow this money or divert money that was for other purposes.”

In private, the union has pressed the government to create “a rapid response working group” of industry and worker representatives to manage that support, and Rousseau said that’s a demand he plans to place on the public record through his testimony.

On their own, the government’s reciprocal tariffs on U.S. products are not enough to protect Canadian industry, said Joseph Galimberti, president of the Canadian Steel Producers Association.

The U.S. tariffs have already had a negative impact on Canadian producers with some shipments already having been cancelled, he said.

“Clearly there’s more that needs to be done,” said Galimberti. “There is a relatively fast exposure to Canadian employment and investment.”