The federal agency's semi-annual survey showed that overall trade confidence slipped to 73.8 per cent, marking a drop from 76.5 per cent 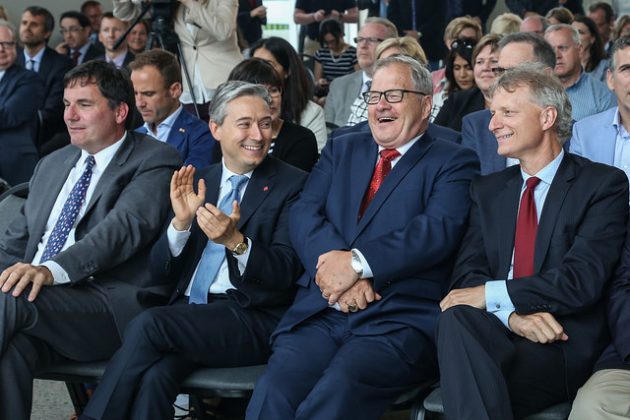 OTTAWA – More than one-third of Canadian exporters say they have been negatively impacted by steel and aluminum tariffs that are affecting Canada-U.S. trade, according to a survey by Export Development Canada.

The Ottawa-based Crown corporation said Tuesday that among companies claiming to having been hit by these tariffs, 19 per cent have in turn raised prices and 18 per cent have found alternate markets and suppliers.

And while the U.S.-Mexico-Canada Agreement, or USMCA, has eased uncertainty, the results of the federal agency’s latest poll show that exporters’ confidence has eroded amid broader global trade tensions such as those between the U.S. and China, said Peter Hall, chief economist at EDC.

Exporters’ expectations have now “come back down to earth,” said Hall.

“Now we’re faced with arguably much more serious global protectionist measures… A battle between China and the United States where there are some very tangible tariffs in place that are global trade inhibitors,” he said in an interview.

The federal agency’s semi-annual survey showed that overall trade confidence slipped to 73.8 per cent, marking a drop from 76.5 per cent on the previous questionnaire six months earlier when exporters’ spirits were buoyed by strong economic activity despite North American trade concerns.

In September, Canada, the U.S. and Mexico finally reached a deal to replace the North American Free Trade agreement, ending months of uncertainty. However, punitive U.S. steel and aluminum tariffs slapped on Canada and Mexico during the strained negotiations remain in place.

Meanwhile, the U.S. and China’s trade war had been escalating until the two economic superpowers reached a truce earlier this month. But, the arrest of a top Chinese technology executive in Vancouver at the request of U.S. authorities may imperil that reprieve.

The federal agency, which supports export-oriented companies, conducted a telephone survey of 1,000 small-, medium- and large-sized Canadian exporters from Oct. 23 to Nov. 13, and found that the signing of the USMCA had a notable impact on their investment plans.

With a deal reached, roughly 41 per cent of companies surveyed now say they have increased or are considering increasing investment – more than double the number of firms from six months prior when a continental trade agreement was still in limbo.

As well, the percentage of companies saying they were delaying plans due to trade deal negotiations has shrunk to 35 per cent, down from 57 per cent of those surveyed six months earlier.

However, 34 per cent of the exporters surveyed said they were negatively impacted by the steel and aluminum tariffs, more than EDC expected, said Hall.

EDC said foreign tariffs or trade barriers were cited by respondents as the top challenge facing Canadian exporters, at 14 per cent. That was followed by obtaining financing and finding skilled talent, both at 11 per cent.

Of the five components included as part of EDC’s confidence measure, it was exporters’ belief in world economic conditions that slipped the most.

One-third of the companies surveyed said increased protectionism was affecting their global strategy.

“It’s not just something that’s a fear, it’s actually impacting their strategy… They’re asking themselves, ‘What is my next move?’ And they’re really unclear about that at the moment,” Hall said.