Spoiling for a fight: combative mood in Mexico for Round 2 of NAFTA talks

Trump's whipping boy seems prepared to whip back. Mexico has declared a red line if the U.S. president starts to pull out of NAFTA, but with a whopping 95 per cent of Mexicans disapproving of Trump, critics want more 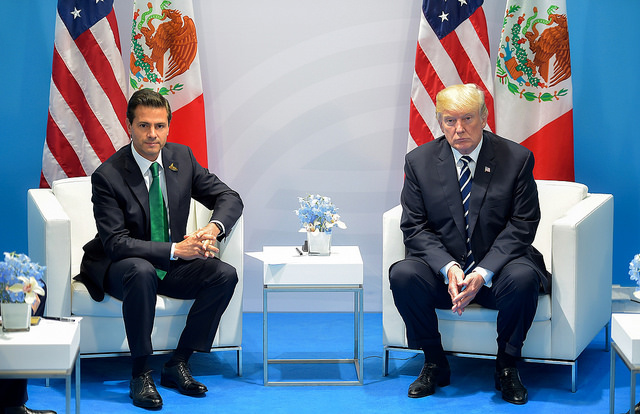 President Trump alongside Mexican President Enrique Pena Nieto in Germany earlier this year. The two have sparred on a number of issues since Trump was sworn in. PHOTO: Presidencia de la República Mexicana/Flickr

MEXICO CITY—A second round of NAFTA negotiations got underway Sept. 1 in a country that has long served as Donald Trump’s political whipping boy. Increasingly, there are indications Mexico is willing to whip back.

After quietly, calmly working with Trump, the centrist governing party has declared a red line: if the president starts to withdraw from NAFTA as he’s threatening, the Enrique Pena Nieto government says it’s leaving the negotiating table.

Trump’s unpopularity in Mexico practically defies the laws of political science. A Pew survey puts his support here just north of the margin of error for zero, with a mere five per cent of Mexicans expressing confidence in the U.S. president.

With an election looming next year, lots of politicians are pining to counter-punch. That includes a famous left-wing lawmaker touted as a possible recruit for the new party that’s leading presidential polls.

There’s a picture of revolutionary fighter Emiliano Zapata hanging on Dolores Padierna’s office wall. She lauds him as the hero of a generations-long, unfinished battle for labour rights and higher wages, which haven’t risen under NAFTA.

The Senate leader of the old left-wing party, the PRD, would respond to Trump’s threats to pull out of NAFTA by pulling out first.

“It’s an embarrassment,” Padierna said in an interview in Spanish.

“When Donald Trump and (U.S. trade czar) Robert Lighthizer—or however you pronounce his name—mistreat, offend our country, we have a government that is very docile, that does not know how to defend the dignity and sovereignty of Mexico.”

Padierna wants to see a NAFTA with stronger labour standards, unionization rights and worker mobility. But barring that, she says, she’d rather see Mexico plan for a future with new trading partners to take up some U.S. slack.

The impulse to fight extends beyond leftist trade-skeptics.

One Mexican diplomat referred to Trump as a “fool” and a “Nazi moron” on his personal Twitter page this week. A recent Mexican ambassador to China, Jorge Guajardo, tweeted this week, “People in (the) U.S. aren’t considering… how little political appetite there is in Mexico to partner (with) Trump’s U.S.A.”

A plane filled with Mexican businessmen was grounded by bad weather this week while returning from the U.S. During the ensuing impromptu midnight dinner at a rain-soaked taco stand near Leon, Mex., talk turned to how best to handle Trump.

“Respond with fire,” said one businessman. The other cupped his hands in a crude, universally recognized gesture, suggesting the Mexican government needed to grow some testosterone.

On Friday, American negotiators will see numerous unflattering Mexican newspaper headlines about their president. In the news this week are Trump’s NAFTA warnings, ramped-up deportations, pardoning of Sheriff Joe Arpaio and threatened government shutdown to fund his border wall.

An opinion piece Wednesday in the regional newspaper in Leon was headlined: “Trump, Arpaio and dogs.” On Thursday, the national newspaper El Universal also ran a column on Arpaio, titled: “Exoneration of racism—another Trump policy.”

One syndicated columnist suggested Trump was merely bluffing in threats to cancel NAFTA. But he wants Mexico to fight back.

“The only way to unmask this bluff is to be ready to terminate,” Sergio Sarmiento wrote in his regular column. “Otherwise, the bully will impose his conditions.”

One Mexico-watcher says the government has done well.

Duncan Wood says Pena Nieto’s team has skillfully juggled various roles since Trump took office Jan. 20, staying constructive but firm. He cited a recent statement in which Mexico said it wouldn’t pay for a wall; described fighting drug-trafficking as a shared duty; said it would not negotiate NAFTA through the media; and offered neighbourly help for flood-stricken Texas.

“The Mexican president and Mexican government have been very effective,” said Wood, director of the Mexico Institute at Washington, D.C.’s Wilson Center.

“They’ve learned how to handle the inevitable tweet or inflammatory statement from the U.S. president…. The government is drawing red lines so that Mexico is respected. And it’s saying, ‘By the way, we’re here to help.”’

As for the Mexican public, Wood summed up their attitude as: “’Look, we’re not against the American people—we just don’t like Donald Trump. We’re not anti-American. We’re anti-Trump.”’

As for the likely election winner, while surveys currently show the new left-wing Morena party, led by Andres Manuel Lopez Obrador, in first place, Wood cites a variety of reasons why the polls are likely to tighten.

He believes constructive dialogue can prevail, NAFTA can survive, and politicians can get elected here without bashing Trump.

But lingering hostilities are making it more difficult, he said, for the current government to agree to a NAFTA deal, and get the necessary ratification votes in Congress: “It makes it a lot more complicated.”