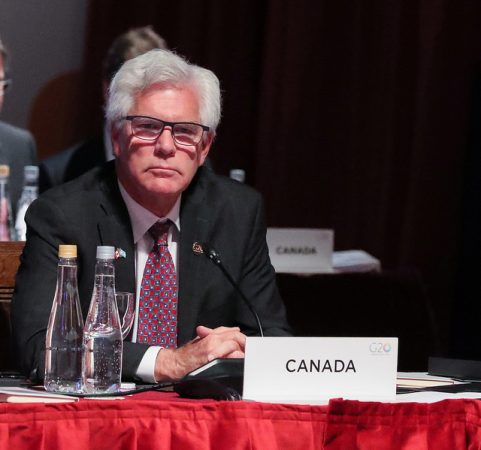 OTTAWA – The fallout from Saudi Arabia’s move to punish Canadian companies was felt within a month of the countries’ sudden diplomatic feud last summer, leading to visa rejections, a government ban on food from Canada and a blockage of shipments at the kingdom’s ports.

Angered by the public condemnation, Saudi Arabia suspended diplomatic ties with Canada last August, expelled the Canadian ambassador and recalled its own envoy from Ottawa.

The kingdom also stopped future trade and investment deals, cancelled grain imports and said it would shut down lucrative scholarships for its citizens to study in Canada. The Saudi central bank and state pension funds started selling their Canadian holdings.

A briefing note to International Trade Minister Jim Carr offers more detail on how events were unfolding on the ground about a month after the start of the dispute.

“It is important to note that over the last few days Global Affairs Canada has been learning of concrete actions taken by Saudi Arabia against Canadian companies across various sectors,” reads the memo, released this week to The Canadian Press under access-to-information law.

The document went on to list numerous measures, including:

The note was created last September for Carr in preparation for his meeting with members of the Canada Arab Business Council, who have interests in the kingdom.

The additional details of the dispute with Saudi Arabia emerge as Canada tries to manage other, bigger trade-related challenges with its two largest partners, the United States and China.

Saudi Arabia has previously been a key partner for Canada in the Middle East and, according to a separate internal briefing note, the countries had more than $4 billion worth of trade in 2017. That year, Saudi Arabia had $1.28 billion worth of direct investment in Canada, said the memo prepared for Finance Minister Bill Morneau after the crisis broke out.

Scott Jolliffe, the president of the Canada Arab Business Council, said in an interview that Saudi investment in Canada ground to a halt last August. He also said Canadian firms have been restricted from bidding on new projects in the kingdom.

On the other hand, he said things have mostly carried on as usual for those of his members who already had business in the country. Jolliffe also said he hadn’t heard of any visa refusals.

He said he would like to see the impasse resolved because Saudi Arabia and the region offer billions of dollars’ worth of potential business for Canadian companies – and possible alternatives to the U.S. There’s a deep need there, he added, for the expertise Canada offers in areas like infrastructure, telecommunications and engineering.

“At the moment, it doesn’t appear as if there is much going on to strengthen and rebuild the relationship,” said Jolliffe, who’s had meetings with Carr about the issue.

The feud has had an impact on agriculture. Feed-barley producers, for instance, have been shut out of the Saudi market.

“Any country we lose, even if it’s temporary, hurts us,” said Dave Bishop, a farmer and chair of Alberta Barley.

He said Canada had been shipping about 122,000 tonnes of feed barley to Saudi Arabia every year – amounts that can sometimes reach 10 per cent of all Canadian exports of the product.

This year, the industry has been lucky that feed barley is in short supply worldwide and extra demand from markets like China has helped make up for being shut out of Saudi Arabia, Bishop added.

The memo to Carr last September said Freeland and Saudi Foreign Minister Adel al-Jubeir, in an effort to resolve the conflict, “have been discussing ideas to de-escalate … including an incremental approach which could include a series of steps.”

Asked about the status of Saudi-Canadian relations now, Carr’s office provided a statement that said he’s still disappointed with the kingdom’s response to Canada’s human-rights concerns.

A few weeks after Carr received the memo, the kingdom’s relationship with Canada came under further strain – as did its relations with many countries – as details emerged about the murder of journalist Jamal Khashoggi inside the Saudi consulate in Istanbul.

Adam Austen, a spokesman for Freeland, said Thursday that Saudi Arabia’s explanations for the killing have been inadequate and that Canada has called for a thorough, credible and independent international investigation.