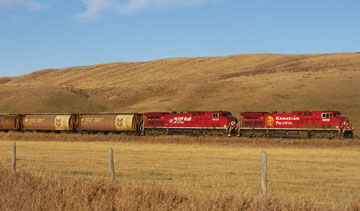 REGINA—The Saskatchewan government is urging rail companies to be prepared to deal with a larger-than-average crop this year, but the railways say they have already put plans in place to do the job.

“I know that they can do this job if there’s the will to do it,” Agriculture Minister Lyle Stewart said Aug. 10 at the legislature in Regina.

“Our job is just to remind them that we’re looking at a situation where they will be a lot of product to move and we’re putting them on the spot. We’re asking in a very public way that they ramp up to get the job done.”

The province doesn’t want to see a repeat of 2013-2014. Western Canadian farmers harvested a record 76 million tonnes of grain—50 per cent higher than average, but a rail bottleneck left much of the crop sitting in bins across the Prairies for months.

Canadian Pacific and Canadian National both say they are ready to do the job.

“CN is fully prepared to move the coming Western Canada grain crop safely, efficiently and quickly. CN, as in years past, has the locomotives, freight cars and people to do the job expected of it,” said an email from spokesman Mark Hallman.

CP responded by forwarding a letter it sent June 28 to several federal and provincial cabinet ministers, including Stewart. It said CP is trying to be “as prepared as possible for moving what could be an historically large crop.”

The company said it is “maintaining and repairing both stored cars and locomotives to add capacity this harvest … and is positioned to recall employees.”

“I am hoping that the energy consumed by finger-pointing in the past can be put instead to a collective effort to work together to move even higher volumes of grain from the Canadian Prairies to customers in the U.S. or international markets,” wrote CEO Hunter Harrison.

Stewart said some of the estimated $1 billion lost by farmers in 2013-14 was recouped when the grain was eventually delivered, but adds the long-term problem is the loss of customer confidence.

“Customers have to feed their people and so they have to be able to rely on shipments arriving on time because people just can’t wait to eat around the world. And almost all of our production, all but five per cent, is export production to feed people around the world.”

The Agricultural Producers Association of Saskatchewan suggested there might be more rail capacity because oil and potash production is down with lower prices.

But association president Norm Hall isn’t confident the rail companies can keep up with a larger than average crop.

“There’s been way too much history with the railroads in broken promises,” said Hall, who has also urged rail companies and the grain industry to be prepared.

“Back in 2013-14, they said their plan was to move a half million tonnes each, per week, to the coast. Then as soon as it turned cold, well, that promise went out the window.”