Three new Canadian pipelines would boost crude capacity by 1.8 million barrels per day, enough for all of western production expected by 2030 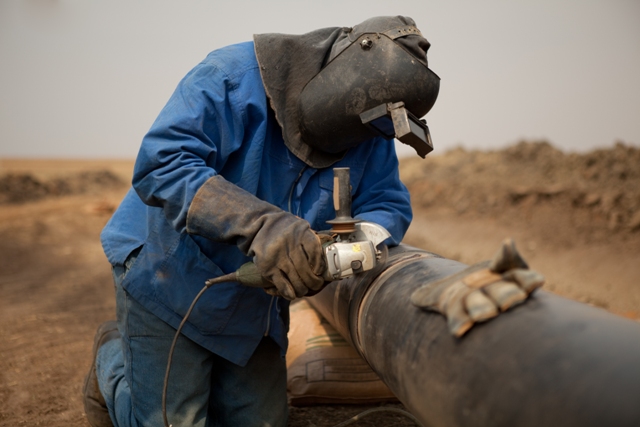 CALGARY—The rumble of crude-oil-laden rail cars though Canadian towns won’t be silenced any time soon, but progress on the Line 3, Trans Mountain and Keystone XL pipelines means there could be far fewer in the future.

“Down the road, if all those pipelines get built, then crude by rail becomes probably a moot point,” said Dirk Lever, managing director at AltaCorp Capital.

Those pipelines have a greater likelihood of moving forward after the federal government approved Enbridge’s Line 3 replacement and Kinder Morgan’s Trans Mountain expansion last November, while just last week TransCanada reapplied to have its Keystone XL project approved after being invited to do so by U.S. President Donald Trump.

All of the projects still face significant environmental opposition, but if built, the combined extra capacity of nearly 1.8 million barrels a day would provide enough room for all of western Canadian production expected by 2030.

If the capacity is there, shippers will choose pipelines because they’re cheaper, said Lever, unless they need a shipment to go to a market still not served through a pipe.

“Given a choice, the economics are always better by pipeline,” he said.

The Canadian Association of Petroleum Producers also saw significant potential for growth, forecasting in 2014 that Canada would be exporting 700,000 barrels of oil a day by the end of 2016.

Plunging crude oil prices took a significant bite out of those numbers, with CP running all of 35,000 carloads of crude in 2016, while National Energy Board data up to November shows that Canada-wide there was an average of 89,000 barrels a day of crude-by-rail exports last year, a 55 per cent drop from 2014.

The drop in rail exports came despite a significant increase in capacity built to match that expected demand, with CAPP estimating Western Canada rail loading capacity of about 754,000 barrels a day.

“When everyone got concerned that we were going to run out of pipeline space, every Tom, Dick, and Harry came running up to Canada to build a crude on rail terminal,” said John Zahary, CEO of crude rail operator Altex Energy.

Zahary doubts capacity is nearly as high as CAPP’s estimate, with several announced projects not actually carried through to completion, but he still doesn’t expect to see more built any time soon.

“A lot of guys built them without contracts and they lost their shirt. So I don’t know that in a relatively short period of time that somebody would want to lose their shirt twice,” he said.

The safety of crude-by-rail has also been an issue for further growth in rail shipping, with the deadly Lac-Megantic train derailment in 2013 showing just how dangerous it can be. But Zahary says the heavy crude, and especially bitumen, produced in Canada is much safer to ship than the light oil produced out of North Dakota’s Bakken oil fields.

And while the long-term future is in question, rising oil prices and a continued short-term crunch on pipeline capacity means there will continue to be shipment spikes, said Chuck Clowdis, managing director of transportation for IHS Economics.

Already there have been significant swings in shipments, with NEB data showing November had an average of about 172,000 barrels a day of oil exported on rail. That’s not far off the 179,000 record in September 2014 and up from 43,000 barrels a day last July.

And if the pipelines are delayed past the expected 2019 start date, then crude by rail could instead come roaring back.

An IHS report released in January said that if pipelines are delayed and the industry can’t find alternatives, crude by rail volumes could reach 800,000 barrels a day by 2020.