Most of the money will go to projects that will have the biggest impact on more easily moving goods and people around the country and over the border, said Transport Minister Marc Garneau 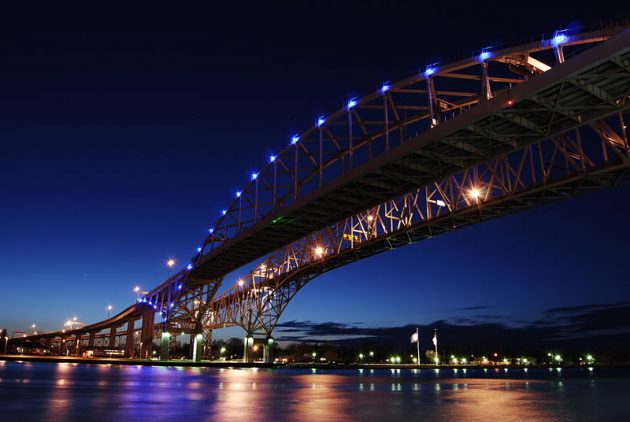 OTTAWA—The federal government plans to sink $2 billion into trade and transport infrastructure, including trade routes along the border with the United States that have become clogged and are in dire need of expansion.

At times, the Canadian and U.S. governments may end up sharing costs on border upgrades, Transport Minister Marc Garneau said during his July 4 announcement. In other cases, he said, it may be Canadian taxpayers footing the bill alone, such as is the case with the Gordie Howe bridge between Windsor, Ont., and Detroit.

Without the planned spending, however, cargo could get caught up in bottlenecks at bridges, tunnels and ports, putting businesses in both countries in peril, Garneau warned a business audience that included the acting American ambassador.

“We must remember that we can have the best quality products and the most ambitious trade agreements in the world, but none of that will matter if we don’t move our goods efficiently and reliably to markets,” he said in a luncheon speech.

“Our customers can always look elsewhere for their needs.”

He pointed to the auto sector, where parts come from both countries and a car crosses the border multiple times before it is sold to consumers.

“That car is as Canadian as it is American, and the process to get it into your driveway keeps people employed on both sides of the border, and so those trade corridors have to keep working too.”

Speaking later with reporters, Garneau played down any suggestion that he was trying to push back against protectionist sentiments from the Trump administration, which is marking its first Independence Day in office and is looking to renegotiate the North American Free Trade Agreement in the coming months.

The $2-billion fund announced July 4 will go to projects that will have the biggest impact on more easily moving goods and people around the country and over borders. Proponents will be able to provide their proposals by Sept. 5, with funding to start coming out early next year.

Garneau said other projects the government will consider funding are those that mitigate the effects climate change and severe weather might have on transportation routes.

“There will be more projects than there is money and some of it will be laid out over a number of years,” he said.

“We want to go with the most urgent and most important (projects) as early as possible.”

Of that $2 billion, the government plans to set aside $400 million towards transportation in the North, where there are few paved runways that limit the type of planes that can fly in, increasing the costs of everyday goods.

There will also be $50 million set aside over five years to cover the cost of writing new regulations to deal with the proliferation of recreational drones, and self-driving cars that are already being tested. A further $50 million will also go to data collection so that shippers, drivers and transportation officials know where cargo is at any given time, to more easily move goods and identify areas for investments.

The money announced Tuesday is part of $10.1 billion in planned spending over the next 11 years on trade and transportation corridor projects.

About half of that money, $5 billion, will flow to projects through the soon-to-be-created infrastructure bank. The bank will use federal cash to try and leverage private investment to help pay for projects that can generate revenue and provide a profit to private investors.


Related Stories
Ottawa mulls exempting more workers from Canada-U.S. border shutdown: Garneau
No way to tell if $1.1B border plan is helping Canada-U.S. cross-border trade
NAFTA: Mexico willing to look at rules of origin, but won’t talk border wall
After the election, should Ottawa be making a bigger fuss about Canada U.S. border?