The premier-designate will be hitting the road to promote Canada-U.S. trade relations south of the border 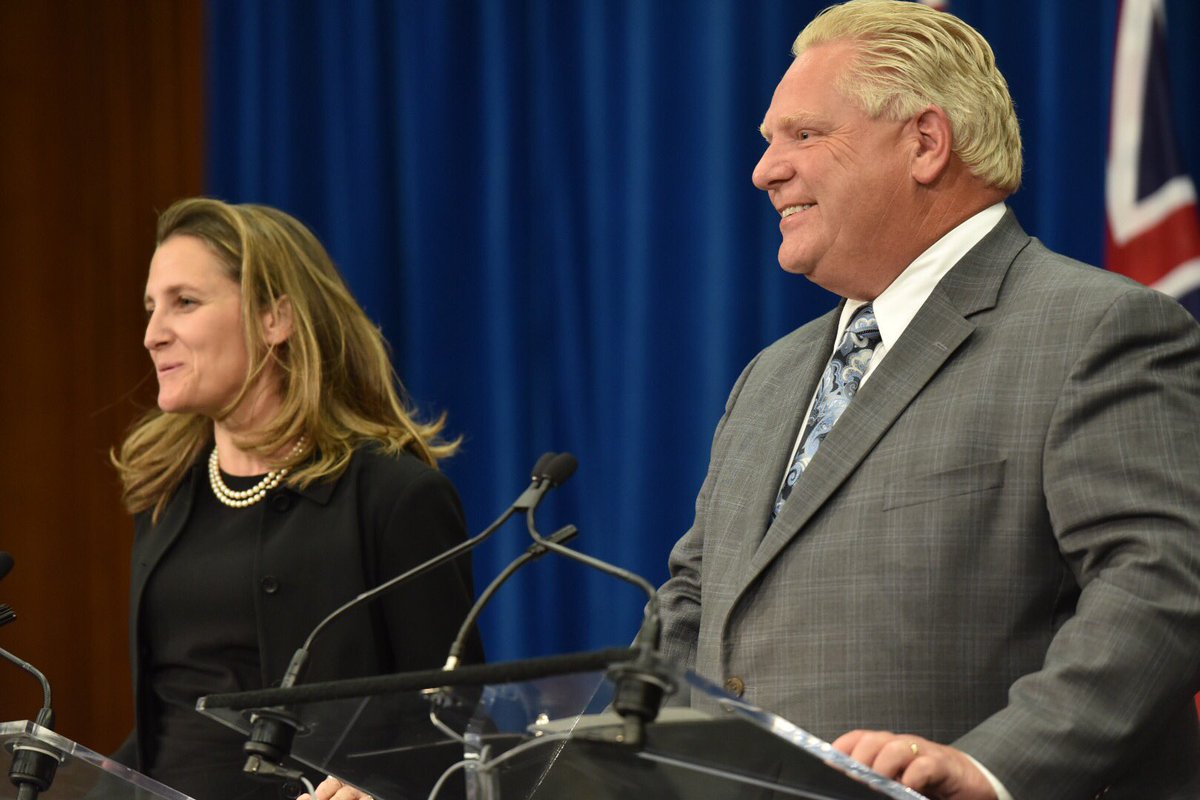 TORONTO—Vowing to stand with the federal Liberals, Ontario’s Progressive Conservative premier-designate said he will travel widely in the United States in a bid to help bolster continuing and complex NAFTA talks.

Doug Ford emerged from a nearly hour-long meeting Thursday afternoon with Foreign Affairs Minister Chrystia Freeland and Canada’s ambassador to the United States, pledging his help in the trade dispute. The businessman and owner of a label-making business with a branch in the U.S., leaned on his background in sales to tell reporters that he will help federal efforts by travelling to the U.S. to discuss trade with U.S. politicians.

Ford, whose Conservatives won a majority last week, will be continuing work begun by outgoing Liberal Premier Kathleen Wynne, who spent months meeting with American governors stressing the importance of reaching a new NAFTA agreement. Ontario will not sit on the sidelines, he said.

“My friends, we must stand together during these critical negotiations because there’s so much at stake,” he said. “Jobs across our economy, workers and their families, entire communities are all counting on us to defend Ontario’s interests and Canada’s interest.”

Related: Doug Ford says he stands with Trudeau on trade despite clashing on other issues

Freeland said the trade discussions are a non-partisan issue and praised Ford and all of Canada’s premiers for presenting a united front to the U.S.

“We’ve been very effective as a country in playing as Team Canada in this very critical negotiation,” she said. “I’m really grateful for all the work that premier’s across the country have been doing in being part of the Team Canada effort. As premier-designate Ford has said, it really has been a non-partisan effort.”

Freeland, who had been in Washington earlier Thursday meeting U.S. trade czar Robert Lighthizer, said she told him she would be would be meeting with Ontario’s premier-designate this afternoon.

“I think he was a little bit surprised,” she said during brief introductory remarks before her meeting with Ford. “I think that was a very important signal and message of Canada being absolutely unified when it comes to this very important issue.”

Freeland said she also consulted Ford on retaliatory tariffs that will be imposed on the U.S. in response to “illegal” tariffs Donald Trump slapped on Canadian steel and aluminium imports.

“On July 1, Canada’s retaliation list will come into effect,” she said. “I want to be clear with Canadians, this is a perfectly reciprocal, measured response.”

Earlier this week, Ford met with auto and steel industry representatives affected by the trade talks and said recent American tariffs on aluminium and steel would hurt jobs on both sides of the border.

Ford’s remarks Thursday echoed his support for the federal government during the tough trade talks. Ford said that while he understands Trump was sticking up for his country in recent remarks criticizing Canada and the prime minister, “name-calling” won’t help resolve disagreements on trade between the two countries.

His comments come after Trump called Trudeau “weak” and “dishonest” in a Twitter tirade the weekend after the prime minister spoke against American tariffs on steel and aluminium.

Related Stories
Doug Ford says he stands with Trudeau on trade despite clashing on other issues
Ontario premier-designate Ford to meet with industry reps on NAFTA
Canada to U.S.: Give us a softwood deal and we may drop WTO case
Minister Freeland seeks a NAFTA win-win, but won’t accept ‘just any deal’
Manufacturing In Focus