At the other end of the scale, exports from Newfoundland and Labrador and Alberta will drop by double digits 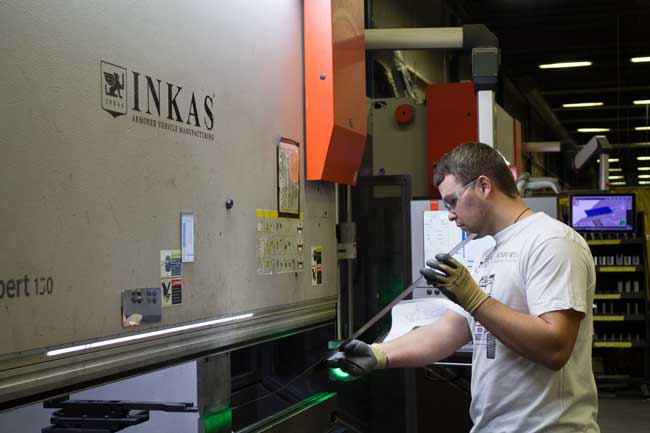 The plant floor at INKAS’ new Toronto facility. Ontario’s automotive sector is expected to be a major driver of growth. PHOTO: David Kennedy

OTTAWA—A new forecast predicts Ontario and Prince Edward Island will lead all provinces with seven per cent growth in exports this year, thanks to a resurgent auto sector, high demand in the U.S. and a low Canadian dollar.

In its semi-annual outlook, Export Development Canada predicts Ontario’s automotive sector, which accounts for nearly 40 per cent of the province’s exports, will grow by 10 per cent this year, bolstered by a record-high demand for light vehicles in the United States.

The EDC says Ontario’s exports of industrial machinery and equipment will rise nine per cent this year, while shipments of metals, ores and other industrial products are expected to grow by five per cent.

The report says exports from Prince Edward Island are expected to grow by seven per cent, thanks to the aerospace industry.

At the other end of the scale, the EDC predicts exports from Newfoundland and Labrador will drop by 11 per cent and Alberta by 10 per cent due to continuing low prices for natural gas and crude oil.

The same factors are also expected to cause a six per cent drop in exports from New Brunswick and three per cent shrinkage in Saskatchewan despite strong performances by non-energy industries. The EDC predicts also exports will rise six per cent in Nova Scotia, five per cent in Quebec, four per cent in Manitoba and a modest two per cent in British Columbia.

On a national basis, the federal agency predicts Canadian merchandise exports will grow at a tepid pace of just two per cent this year with negative growth in the energy, fertilizer, chemicals and plastics sectors. In 2017, the EDC predicts a gradual strengthening of natural gas and crude oil prices will steer Canadian exports toward a six per cent expansion.

“This is having a considerable impact on Ontario’s exports, and we expect that demand to continue going forward, not just in the auto industry but most sectors of Ontario’s economy.”

The EDC is a Crown corporation which provides financing to help Canadian companies invest in international business opportunities.