Just after negotiators concluded the first round of talks in Washington, Trump lobbed yet another threat. The only surprise was how quickly the president played his primary piece of negotiating leverage 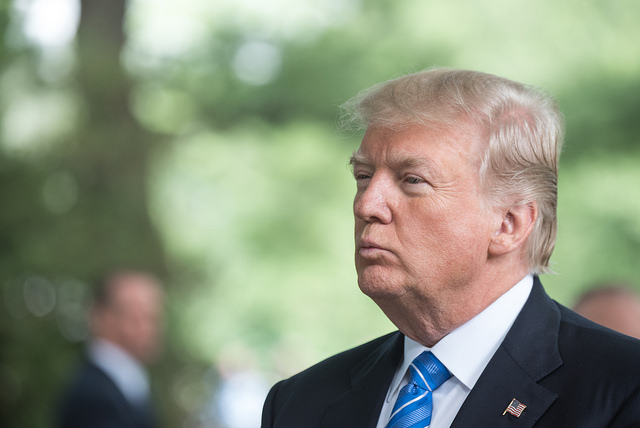 The president wasted little time directing another threat at trade negotiators. PHOTO: Chairman of the Joint Chiefs of Staff/Flickr

WASHINGTON—Donald Trump has threatened to blow up NAFTA less than one week into the renegotiation of the trade agreement, providing an early indication that the upcoming talks might occur under a cloud of menace.

The president’s threat itself is no surprise. A common topic of hallway chatter at last week’s first round of talks was just when he might deploy that withdrawal threat, which many view as his principal source of negotiating leverage.

The only surprise is how quickly it came.

“So I think we’ll end up probably terminating NAFTA at some point.”

He repeated it: “I told you from the first day, we will renegotiate NAFTA or we will terminate NAFTA. I personally don’t think you can make a deal without termination but we’ll see what happens. You’re in good hands, I can tell you.”

He’s made the threat numerous times, but this is the first time he’s done it since Canada, the U.S. and Mexico began talks last week.

Mexico’s foreign minister shrugged it off as a leverage play: “No surprise: we’re in a negotiation,” Luis Videgaray tweeted in response. “Mexico will remain at the table with calmness, firmness, and in the national interest.”

Insiders say they expect him to keep making these threats. It’s his main source of power to force the other countries to reach an agreement. One well-connected Washington lobbyist at last week’s talks said he was convinced the threat was coming: “Almost 100 per cent.”

The former deputy trade czar under Barack Obama said it’s an obvious move and he thinks the president made it too early. In an interview several weeks ago, Robert Holleyman said it was a serious tactical error when Trump made the threat in April.

He said Canada and Mexico gained valuable insight that will render Trump’s threats less powerful at the negotiating table: in April, the U.S. Congress pushed back against him, the business community fumed, and his own cabinet members pleaded against it.

”You do that at the 11th hour in the negotiation—not at the throat-clearing stage … I suspect President Trump will be unable to play that card again. And if he does play it, it won’t be as strong as it would’ve been… The Canadians and Mexicans will say, ‘You… will face a huge backlash in your own Congress.”’

That episode in April underscored the complexity of ending NAFTA.

Without the support of Congress, a president might withdraw the U.S. from the international agreement, but he could not singlehandedly wave away the law on the U.S. books that implemented NAFTA.

An international economic law professor and former State Department lawyer said he believes it would ultimately end up in court. And he said U.S. courts would ultimately conclude that the president can’t rip up NAFTA without congressional support.

That’s because the president can’t just erase the 1994 NAFTA Implementation Act passed by Congress. Only Congress can pass laws. In addition, the U.S. Constitution makes clear that Congress has power over international commerce.

“If the president were to rip up NAFTA, and then sort of jack tariffs way up, I think somebody would be able to come in and say… ‘You’re actually violating U.S. domestic law,”’ said Tim Meyer, a Vanderbilt professor, former government lawyer, and onetime clerk for Neil Gorsuch, whom Trump appointed to the Supreme Court.

“I think courts are going to be sympathetic to the idea that the president can’t ignore the legislation that implements these trade agreements. Congress has not repealed that legislation, and they’ve given no indication they intend to.”

That being said, several observers suggest a presidential attempt to withdraw could set up a legal and political tug of war with Congress over the setting of new tariff schedules—and that would foster economic uncertainty.