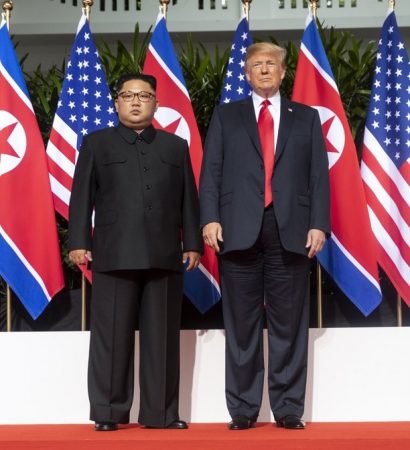 HANOI, Vietnam – President Donald Trump said he walked away from his second summit with North Korean leader Kim Jong Un because Kim demanded the U.S. lift all of its sanctions, a claim that North Korea’s delegation called a rare news conference in the middle of the night to deny.

So who’s telling the truth? In this case, it seems that the North Koreans are. And it’s a demand they have been pushing for weeks in lower-level talks.

Trump’s much-anticipated meeting with Kim, held in the Vietnamese capital Wednesday and Thursday, ended abruptly and without the two leaders signing any agreements. Trump spoke with reporters soon after the talks broke down and said the dispute over sanctions was the deal breaker.

“Basically, they wanted the sanctions lifted in their entirety, and we couldn’t do that,” he said. “We had to walk away from that.”

Hours later, two senior members of the North’s delegation told reporters that was not what Kim had demanded. They insisted Kim had asked only for partial sanctions relief in exchange for shutting down the North’s main nuclear complex. Foreign Minister Ri Yong Ho said the North was also ready to offer in writing a permanent halt of the country’s nuclear and intercontinental ballistic missile tests.

The State Department then clarified the U.S. position.

According to a senior official who briefed the media on condition he not be named because he was not authorized to discuss the negotiations publicly, the North Koreans “basically asked for the lifting of all sanctions.”

But he acknowledged the North’s demand was only for Washington to back the lifting of United Nations Security Council sanctions imposed since March 2016 and didn’t include the other resolutions going back a decade more.

What Pyongyang was seeking, he said, was the lifting of sanctions that impede the civilian economy and the people’s livelihood – as Ri had claimed.

The U.N. Security Council has imposed nearly a dozen resolutions targeting North Korea, making it one of the most heavily sanctioned countries in the world. So Kim was indeed seeking a lot of relief – including the lifting of bans on everything from trade in metals, raw materials, luxury goods, seafood, coal exports, refined petroleum imports, raw petroleum imports.

But Kim wasn’t looking for the lifting of sanctions on armaments. Those were imposed earlier, from 2006, when the North conducted its first nuclear test.

For Pyongyang, that’s a key difference.

While it claims that its nuclear weapons are needed for self-defence, it was offering to at least for the time being accept sanctions directly related to nuclear weapons and missile technology. But the North has always considered the imposition of sanctions on other areas of trade even more nefarious and was singling them out as their negotiation point.

The State Department official said Trump and his negotiators deemed that to be a bridge too far because they had already determined that lifting the post-2016 sanctions would be worth “many, many billions of dollars” for the North and could essentially be used to fund their continued nuclear and missile programs.

So it was definitely a robust demand. But it wasn’t, as Trump claimed, all the sanctions.

It also didn’t come as a surprise. He said the North had been pushing that demand for weeks in lower-level talks.

Even so, both sides seemed determined to put a good face on the summit, which Trump said was generally friendly and constructive.

In a much softer tone than the officials at the late-night news conference, the North’s state-run media made no mention of Trump’s decision to walk away without any agreements and indicated that the North was looking ahead to more talks.

“The top leaders of the two countries appreciated that the second meeting in Hanoi offered an important occasion for deepening mutual respect and trust and putting the relations between the two countries on a new stage,” it said. “They agreed to keep in close touch with each other for the denuclearization of the Korean Peninsula and the epochal development of the DPRK-U.S. relations in the future.”

It said Kim expressed his thanks to Trump for making positive efforts for the successful meeting and talks “while making a long journey and said goodbye, promising the next meeting.”