Angel Gurria, secretary general of the Organization for Economic Co-operation and Development, raised alarm bells about threats to the global trade order when he addressed a gathering in Montreal 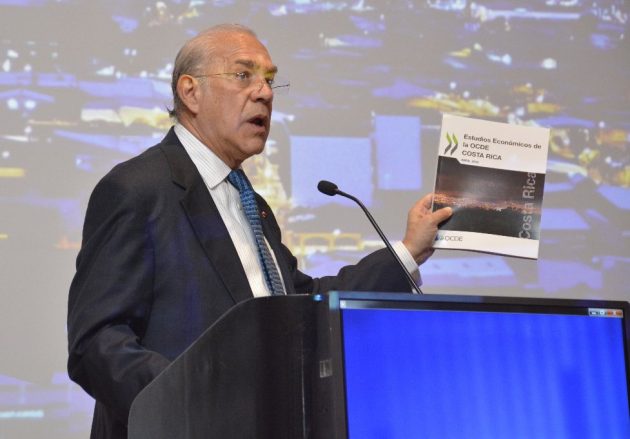 MONTREAL—Multilateralism is under threat amid trade tensions, rising protectionism and the changes associated with the transformation to a global digital economy, the head of the Organization for Economic Co-operation and Development said Monday.

“It is time to rise to the challenge and take these threats to multilateralism seriously and to stand up and respond to them,” Angel Gurria, secretary general of the OECD told the Montreal Council on Foreign Relations.

He spoke before the start of social policy ministerial meetings involving representatives from about 35 member countries Tuesday in Montreal, the first by the OECD outside of Paris.

Global trade in goods and services has increased by more than 30 per cent over the last decade and the number of people crossing borders is also growing, said Gurria.

As a result, multilateralism is at a crossroads and needs to be adapted to new economic, financial and policy challenges, he added.

That includes ensuring that countries and companies can compete fairly, free of government favour toward domestic suppliers and disparate labour and environmental standards.

Gurria pointed to agriculture as one area that is heavily distorted, with producers in 50 countries getting US$585 billion in annual government support. Overcapacity of steel is also depressing prices and causing job losses.

Digital transformation is raising new questions about competition and traditional concepts about taxation, and Gurria said the OECD is ready to possibly advance by a year the adoption of a blueprint on taxation of large digital companies that is currently due in 2020.

Up to 14 per cent of jobs may be made obsolete by automation over the next 10 to 15 years, and an additional one-third will be disrupted by change, he told reporters.

Technology is also raising the risk of cross-border criminal activity, with cyber crimes estimated to cost more than US$1 trillion annually.

Gurria said the goal of reshaping multilateralism is to support sustainable and more inclusive growth.

But he said there is no “rewind button on global integration” since the world in inherently interconnected.

“Backtracking on integration or disconnecting is not an option. Our world, our jobs, our culture, our hopes and dreams are inherently interconnected.”

The global economy last year grew by 3.7 per cent, its fastest pace since 2010, and is expected to expand by nearly four per cent this year and next.

Trade and investment have rebounded and employment rates are back to levels that pre-date the financial crisis a decade ago.

Yet he said recent protectionist trade measures and retaliatory threats—from countries he declined to name—have begun to affect business confidence and there are signs that growth is being undermined by uncertainty.

Soft wage growth won’t check rising inequality. The average income of the richest 10 per cent is now around 10 times that of the poorest 10 per cent, up from seven times 25 years ago.

During a break in the policy forum, Gurria said the social policy agenda put in place by the Canadian government can serve as an example for other countries about how the creation of a fairer society inevitably does better economically.

Jean-Yves Duclos, minister of Families, Children and Social Development, said the upcoming G7 summit in Quebec next month will also include discussions about how to make economies more supportive of the middle class.

“Making a better connection between social and economic outcomes, as will be done in the G7 summit, is also going to help us from a political perspective across the G7 and OECD countries support that agenda for the longer term,” he said during a break in the policy forum.