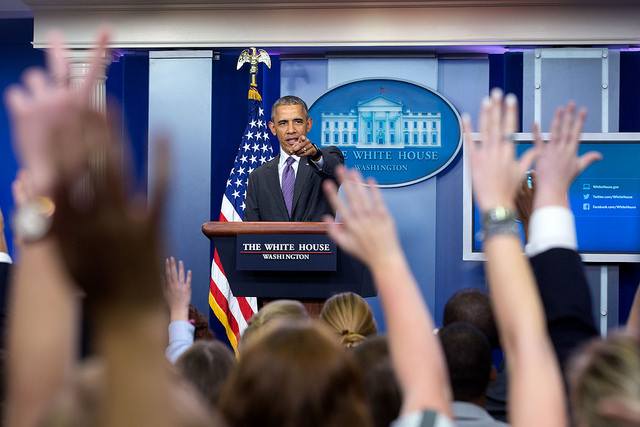 The two-term president plans to use his final few weeks in office to promote the mammoth trade deal. PHOTO: Amanda Lucidon/The White House, via Flickr

OTTAWA—President Barack Obama will use every remaining day of his term to win congressional approval for the Trans-Pacific Partnership trade agreement, says the U.S. ambassador to Canada.

Envoy Bruce Heyman says that remains the position of the current administration as Americans head to the polls Nov. 8 to select a new president from two protectionist candidates.

Democrat Hillary Clinton and Republican Donald Trump both oppose the 12-country Pacific Rim trade deal that would encompass 40 per cent of the world’s economy.

Heyman had no comment on the two candidates’ positions on trade, but he made it clear in an interview that Obama will use the remaining time he has left in office to push the pact through Congress.

There has been much speculation that Obama would use the period between the Nov. 8 election and the Jan. 20 inauguration of his successor to finalize the deal.

If Obama succeeds, Heyman said he would like to see Canada follow suit with its approval as well.

“I can’t speak for what the next government would do,” Heyman said.

He said there would be “a really good look at TPP in the United States and I hope to be part of the group of people that will be encouraging members of Congress to take a serious look at this and hopefully pass the TPP” before Obama leaves office.

“If that happens, I also look forward to hopefully getting Canada on board after its consultation process and joining us so that all 12 countries can do this,” Heyman said.

Canada’s participation in the agreement was negotiated by the previous Conservative government and announced two weeks before the end of the October 2015 federal election campaign.

The current Liberal government says it also believes in free trade, but has opted to open the TPP up to widespread consultations prior to making a decision. The House of Commons trade committee is also studying the deal.

Clinton once called the TPP “the gold standard in trade agreements,” but withdrew her support during the Democratic primaries to win support from backers of Sen. Bernie Sanders, who opposes the deal. She has since said the pact doesn’t do enough to protect American jobs and national security.

Former prime minister Brian Mulroney recently said that the TPP was on “shaky ground” in the U.S. Congress when asked about Clinton’s opposition to the deal.

“The TPP is not going to fly anyway,” Mulroney said last month at St. Francis Xavier University in Antigonish, N.S.

Obama pushed hard for the TPP during his first meeting with Prime Minister Justin Trudeau at the APEC summit in the Philippines in November 2015.

In September, a study by the chief economist of Global Affairs Canada predicted that signing the TPP would generate $4 billion in long-term gains in GDP, but would cost Canada $5 billion if it opts out of the deal.

Critics of the deal say it would hurt the dairy industry and auto sector and give too much power to large corporations to sue governments if they see a threat to profits.