No, there’s not going to be a trade war with Canada: White House spokesman

Despite rising tensions, Sean Spicer brushed off the possibility of a trade war breaking out between Canada and the U.S., saying "that's why we have dispute-settlement mechanisms" 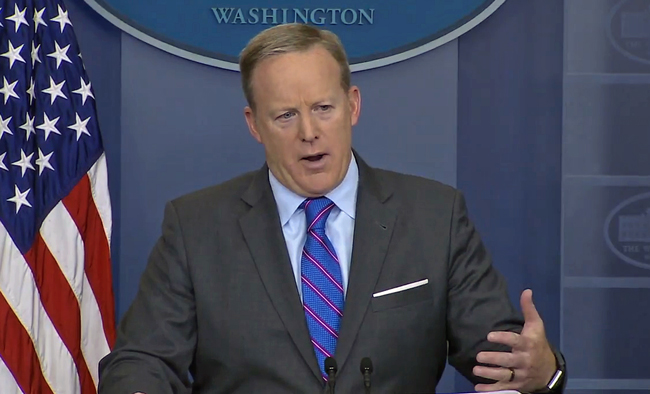 WASHINGTON—The White House is downplaying talk of a U.S. trade war with Canada, with President Donald Trump’s spokesman brushing off the notion when asked about it March 8.

”No,” Sean Spicer said when asked whether he sees a north-south trade war escalating.

He said regular trade remedy procedures are simply doing their job. The U.S. has slapped tariffs as high as 24 per cent on Canadian lumber, as part of its long-standing view that Canadian logging companies get unfair subsidies.

The Canadian government is now considering retaliation in two areas: one is a possible ban on exports of U.S. coal from B.C., and government sources say the other is a study of potential duties against products from Oregon.

The targeting of Oregon is related to the fact that Canadian officials see that state’s Democratic Sen. Ron Wyden as a particularly obstinate opponent of a softwood lumber settlement.

Sources tell The Canadian Press that federal officials are poring through examples from Oregon state of subsidies for businesses, and exploring grounds for an investigation that could result in duties on Oregon plywood, flooring, wood chips, packing and wine.

U.S. Commerce Secretary Wilbur Ross said over the weekend that he won’t be pressured into making a lumber deal.

The president’s spokesman said Monday that the U.S. is merely following its legal, legitimate trade-dispute practices. Domestic law allows U.S. lumber producers to seek an investigation and punitive duties if they feel unfairly undercut; the U.S. government agrees with them that Canadian rivals’ low-fee access to public land comprises a subsidy.

”That’s why we have dispute-settlement mechanisms to do this in a responsible way,” Spicer said. ”Let’s let it play out. But I think secretary Ross took appropriate action to protect the U.S. industry and we’re going to let the process play out.”

He was also asked when NAFTA renegotiations might start.

The earliest it could happen is August, if the Trump administration immediately sent a 90-day notice to the U.S. Congress. But that letter has not been sent. Lawmakers have been slow to approve the contents of the letter and have not yet confirmed Trump’s trade czar.

The confirmation of that trade representative, Robert Lighthizer, could happen soon. Yet negotiators could be pressed for time, if they want to get a deal before the Mexican election enters full swing next spring.

Spicer said there would be updates, but not right away: ”Right now there’s nothing to share.”