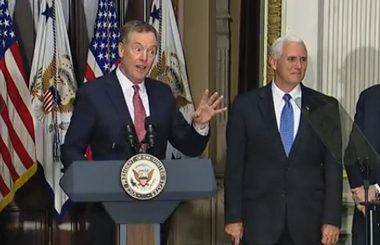 Vice-President Mike Pence swore in Robert Lighthizer as the U.S. trade representative May 15

WASHINGTON—Never mind his reported blabbing about secret intelligence to a foreign adversary, low approval numbers, lack of signature legislation, hints of another major staff shakeup and multiple investigations into his election win now morphing into requests for data from a federal money-laundering unit.

Future generations won’t remember Donald Trump for any of these things, says a new member of his team. Instead, they will celebrate him as something else—a towering great of American politics.

As he was sworn in May 15 as the new U.S. trade czar, Robert Lighthizer predicted his new boss would make history for reversing some of the damaging trends of globalization that have harmed American workers.

“The Trump administration will be ranked as among the greatest in American history,” Lighthizer said at the swearing-in ceremony where he became the U.S. trade representative.

“I further believe that when my grandchildren … talk to their grandchildren, they will say that President Trump permanently reversed the dangerous trajectory of American trade, put America first, made our farmers, ranchers and workers richer, and the country safer. I hope I can make some small contribution to that accomplishment.”

He was making these remarks just before the latest White House headache.

Multiple news outlets said that while meeting with the Russian government last week, the president bragged about highly classified information he’d learned about ISIL, information collected through such sensitive channels the U.S. government had yet to share it with close allies.

In a statement, the administration said the president did not discuss specific sources and methods.

Lighthizer happened to be meeting the president while those reports were breaking. It’s not yet clear whether he will also meet Canada’s foreign affairs minister—Chrystia Freeland is visiting Washington this week and meeting several cabinet members.

Lighthizer was confirmed after a long congressional delay, setting the stage for the launch of NAFTA negotiations. Now that Lighthizer is in place, he can work with Congress to set negotiating priorities before the U.S., Canada and Mexico start trade talks later this year.

Lighthizer was sworn in by Vice-President Mike Pence.

Pence extolled this nomination as proof of the president’s commitment to reshaping trade policy. Lighthizer is considered a highly knowledgeable, highly experienced lawyer and veteran of numerous trade lawsuits, with past experience in the Reagan administration and in the U.S. Senate finance committee, which holds a major role in trade policy.

When the vote for his confirmation finally arrived last week, Lighthizer received the overwhelming support of both parties. Several Republicans opposed him, including John McCain.

The former presidential nominee is a big supporter of NAFTA, and trade deals generally, and has expressed concern Lighthizer might replace decades of Republican policy with the more protectionist impulses of his new boss.

Lighthizer also once wrote a newspaper column in 2008 defending protectionist policies, saying they were an old, yet recently dormant tradition in Republican politics, and saying support for free trade didn’t prove McCain was conservative.

Another former GOP nominee was at the swearing-in Monday: Bob Dole, who once hired Lighthizer as a staffer on the Senate finance committee, and spoke in his defence at his nomination hearing.

Lighthizer said of the 1996 nominee: “You’re a great American, a great mentor, and I’m blessed to have you as a friend.”