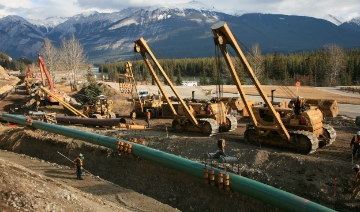 Prime Minister Justin Trudeau’s cabinet is now set to make a final decision by the end of the year. PHOTO: Kinder Morgan Canada. All rights reserved.

VANCOUVER—The National Energy Board has recommended that the federal government approve the contentious $6.8-billion Trans Mountain pipeline expansion with 157 conditions.

The federal regulator has issued its long-awaited report on the project after a two-year debate that cost millions, galvanized aboriginal and environmental protests and prompted mass arrests.

A three-member review panel recommended Ottawa approve Kinder Morgan Canada’s proposal to triple the capacity of the pipeline, which carries crude from oilsands near Edmonton to Burnaby, B.C.

But Kinder Morgan will first have to address 157 engineering, safety, environmental and emergency preparedness conditions.

The positive recommendation has cleared a major hurdle for the project, with Prime Minister Justin Trudeau’s cabinet set to make a final decision by the end of the year.

There was fierce opposition to the project and the process throughout the energy board’s hearing, with the British Columbia government and cities of Vancouver and Burnaby opposing the expansion.