With the "wiring and plumbing" in place, David MacNaughton said the three countries can work out the final few sticking points and reach a deal before the Mexican election and U.S. midterms disrupt the process 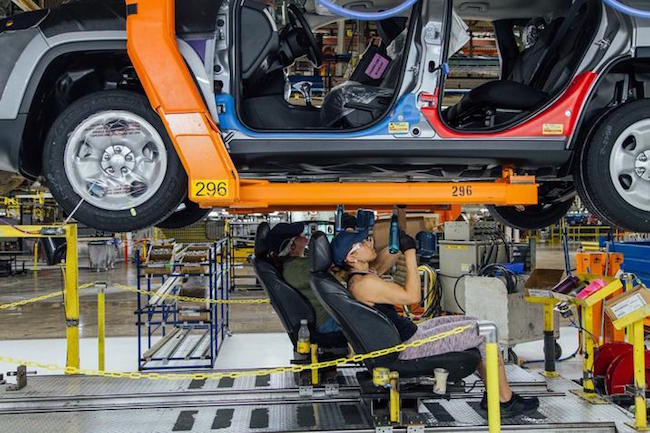 Substantial differences on the auto industry, along with several other sticking points, could create a roadblock for negotiators. PHOTO: FCA

OTTAWA—Canada’s ambassador to the United States said Feb. 5 he believes NAFTA negotiators can reach an agreement in principle by the end of March.

The upbeat assessment from envoy David MacNaughton comes in the face of the continuing threat from U.S. President Donald Trump to blow up the deal, which hangs over the final eight weeks in the current negotiating schedule.

MacNaughton refused to speculate on whether Trump is likely to pull out of NAFTA, but he said enough progress has been made on the “wiring and plumbing” of the agreement that all three countries can iron out their differences on the more substantial issues in the next two months.

“I would love to see a deal done,” the envoy said after an event in Ottawa with his U.S. counterpart, Kelly Craft. “We’ve made tremendous progress on some of the less spectacular things.”

Craft said little about the substance of the negotiations in her appearance with MacNaughton during a staged question-and-answer session at a conference on North American energy. But the two ambassadors did laud their close co-operation and the ties of friendship between Canada and the U.S.

Craft dropped a broad hint that she doesn’t find her president’s rhetoric helpful.

“When President Trump asked me to consider serving as U.S. ambassador to Canada, he promised that this would be very interesting and very, very important,” she said.

“I don’t really need him to continually say ‘tear up NAFTA’ to keep it interesting. A little bit of boring would have been just fine with me.”

MacNaughton said the time has come to leave political rhetoric behind and find a workable agreement in principle that officials can hammer out later.

“There are still four or five sticking points,” he said.

“I think we roll up our sleeves and work hard on them we can at least get to the point where we’ve got an understanding, whether it be an agreement in principle or whatever it is, which we then allow technical people to work on.”

Two more rounds of negotiations are set to take place before presidential elections in Mexico and the U.S. congressional midterms, which observers fear could prove disruptive.

The lingering doubt is bad for the U.S. economy and business in general, MacNaughton said.

“The uncertainty causes people to sit on their wallets rather than make investments,” he said. “I’d hate to see that stalled because of the uncertainty around NAFTA.”

The NAFTA renegotiation survived its sixth round of talks in Montreal, with the U.S. dialing down some of its negative rhetoric, including its imminent threats of withdrawal.

U.S. trade czar Robert Lighthizer said he was unsatisfied with Canadian proposals on autos and characterized a Canadian complaint to the World Trade Organization as a “massive attack” against the U.S. trading system. But he said enough progress was made in Montreal to continue the talks.

Craft said the U.S. wants to see greater energy co-operation between Canada, Mexico and the United States reflected in an updated NAFTA.

“A separate energy chapter must add value not duplicate obligations found in other chapters.”

Craft did not elaborate and left the event without speaking to reporters afterwards.