Brexit talks by U.K.’s May called a ‘stunt’ by opposition [UPDATED]

The British PM survived a non-confidence vote and kept her job, but has big task ahead 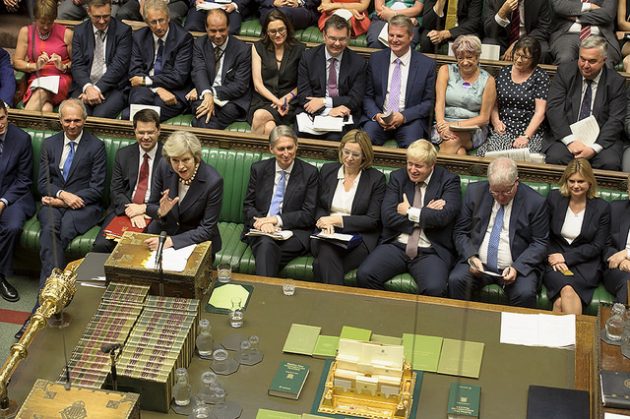 Theresa May and the British Parliament. PHOTO: UK Parliament/Jessica Taylor, via Flickr

But the country’s main opposition leader branded the talks a “stunt,” and May gave little sign she would make major changes to the divorce deal tossed out by Parliament this week. A new Brexit showdown between Parliament and government looked to be looming in the House of Commons before the end of the month.

“The really important question is, ‘there’s an open door, is there an open mind to a change?”’ said Labour Party lawmaker Hilary Benn, who heads Parliament’s Brexit committee and met with May on Thursday.

With Britain’s Brexit process gridlocked, EU countries stepped up preparations for a disorderly British exit on March 29. The nations were spending millions, hiring thousands of workers and issuing emergency decrees to cope with the possibility that Britain will leave the bloc without an agreement to smooth the way.

Related: May wins no-confidence vote, but is still beset by Brexit [PLANT]

A chastened May promised that she would hold talks “in a constructive spirit” with leaders of opposition parties and other lawmakers in a bid to find a way forward for Britain’s EU exit.

The government confirmed that May will meet a Monday deadline to publish a Brexit “Plan B,” and that lawmakers will have a full day to debate it _ and, crucially, amend it _ on Jan. 29.

May so far has showed little inclination to make major changes to her Brexit deal or lift her insistence that Brexit means leaving the EU’s single market and customs union.

Many lawmakers think a “soft Brexit” that kept Britain in the EU’s single market or customs union is the only plan capable of winning a majority in Parliament. A smaller but substantial group of Brexit-backing lawmakers is strongly opposed to that idea.

May and other senior ministers met Thursday with representatives from several of Parliament’s feuding Brexit factions: Northern Ireland’s compromise-rejecting Democratic Unionists, Euroskeptic “hard Brexit”-backing Conservatives, those urging Britain to hold a second EU membership referendum and supporters of a close economic relationship with the EU.

May claimed to be listening, but she can’t please everyone.

Jeremy Corbyn, leader of the main opposition Labour Party, said he wouldn’t meet with May until she took a no-deal Brexit “off the table.”

“To get a deal that can command a majority in Parliament, Theresa May has to ditch the red lines and get serious about proposals for the future,” Corbyn said during a speech to supporters in the English seaside town of Hastings. “Last night’s offer of talks with party leaders turned out to be simply a stunt, not the serious attempt to engage with the new reality that’s needed.”

In a letter to Corbyn, released by the prime minister’s office, May said it was “not within the government’s power to rule out no deal” because by law Britain will leave the EU on March 29 “unless Parliament either agrees a deal with the EU or the U.K. … chooses to stay in the EU permanently.”

She said it would be wrong to stay in the EU and “overturn the referendum result.”

As Britain flounders, the 27 other EU countries have stood firm, saying they won’t renegotiate the withdrawal agreement and insisting that the British government and its lawmakers need to decide what they want to do.

EU Brexit negotiator Michel Barnier, who said Wednesday that he was more concerned than ever that Britain could crash out of the EU without an agreement, said the red lines set out by Britain’s negotiators on issues such as the customs union and limiting immigration had “shut doors.”

Barnier said Thursday that “something has to change” to secure a divorce deal.

“If (the red lines) change, we’ll change,” Barnier said after meeting with Portuguese officials in Lisbon.

French Prime Minister Edouard Philippe held a special government meeting Thursday on planning to cope with a “no-deal” Brexit. France is spending 50 million euros ($57 million) to increase security at airports and the Eurotunnel, and it is hiring hundreds of extra customs officers. The French parliament adopted a law Wednesday allowing emergency measures after March 30 in the event that Britain leaves without a deal.

Such measures could aim to reduce problems in cross-border trade and transport, notably through the Eurotunnel beneath the English Channel, and allow British workers and retirees based in France temporary permission to stay until a longer-term deal is worked out.

Britain has already devoted thousands of civil servants and several billion pounds (dollars) to no-deal planning, amid warnings from businesses and economists that the country faces disruption to trade, goods shortages and a deep recession if it crashes out of the bloc without a deal.

The government said Thursday it had issued an order allowing military reservists to be called up for a year of full-time service in the event of a no-deal Brexit.

“It is outrageous,” said Liberal Democrat armed forces spokesman Jamie Stone. “What kind of message to the country is this? It does nothing to alleviate the worry and uncertainty people feel.”