An issue for upcoming NAFTA talks: Getting Mexicans a pay raise 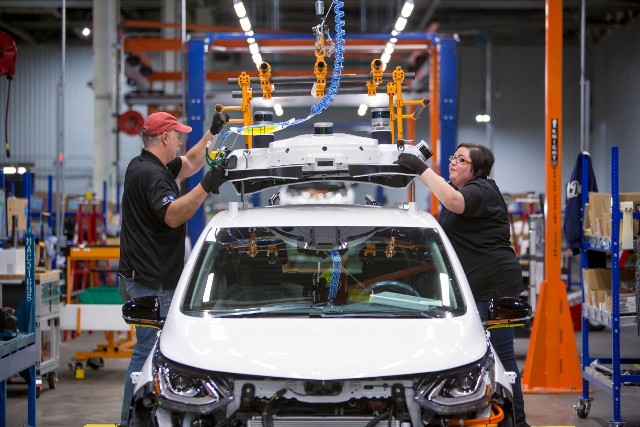 Unions say auto workers in Mexico earn just over $4 an hour, a fraction of their counterparts in the U.S. and Canada. PHOTO: Jeffrey Sauger/GM

WASHINGTON—The cost of Mexican labour will be an issue in the renegotiation of the North American Free Trade Agreement, participants acknowledged at an auto-industry conference, touching on one of the key sectors up for discussion.

It’s an issue officials from the national governments have been raising in the runup to the talks—the idea that any new agreement should address the ongoing, yawning wage disparity between auto workers in Mexico and their northern peers.

At a Washington gathering organized by the Motor & Equipment Manufacturers Association Aug. 9, the head of an international auto group said he’s prepared for labour to become an issue after talks start this month.

“Labour standards will be part of the negotiation,” said John Bozzella, president and CEO of Global Automakers, which represents major companies like Honda, Hyundai and Nissan.

“I would expect that.”

He demurred on whether he might welcome labour changes, saying he’ll await some details: “Really, that’s a question that requires us to have more understanding of all the elements of the discussion in play. So I can’t really answer that question now. Maybe later in the process.”

The basic issue involves the competitive advantage Mexico enjoys in attracting auto plants—low labour costs in a country whose auto workers take home a fraction of what their peers in Canada and the U.S. do.

Unions peg the average auto-worker wage in Mexico at just over $4 an hour.

This disparity is a pressing priority for some policy-makers. With auto companies preparing to make a historic round of investments in next-generation electric and autonomous vehicles, officials want to guarantee a share for their countries—including Canada, which has seen its proportion dwindle.

The unions describe the wage gap as an immediate priority and have proposed labour reforms including new rules for forming unions. All three national governments have also spoken about labour reforms as an issue for the talks.

U.S. Commerce Secretary Wilbur Ross cited it as a top priority earlier this year in an interview with CNBC. He said the supposed point of NAFTA was to gradually converge living standards between the countries: “That really hasn’t happened on the Mexican side,” he said. “Mexican workers are really not at all better off.”

But those figures don’t tell the whole story.

A McKinsey report in 2014 argued that Mexico has a two-tier economy: with one benefiting from gains under NAFTA-related manufacturing and another in decline related to more traditional sectors isolated from trade.

Another participant at the Washington conference said it’s complicated. He urged people to note a broader international context; productivity levels, not just wages; and evolving attitudes in Mexican society.

Eric Farnsworth of the Council of the Americas agreed that labour will be a NAFTA topic.

“You’re right. It’s clearly an issue. It has been an issue for some time,” he said when asked about labour reforms.

But he said people looking at Mexico when discussing cheap labour are pointing in the wrong direction. North American workers face the greatest low-cost wage competition from outside their trade zone, he said—not within.

“Mexico is not the low-cost choice. The cost of Mexican labour is a lot higher than Asia or other developing markets,” Farnsworth said.

“The idea that Mexico is some sort of a backward place where labour is viewed, and the environment is, as an afterthought—if it ever was true I don’t think it increasingly is. I think this is clearly a country that has advanced, moved forward, and will continue to do so.

“Not because it’s a part of NAFTA—or because they think the United States wants it. But because their own people are demanding it.”