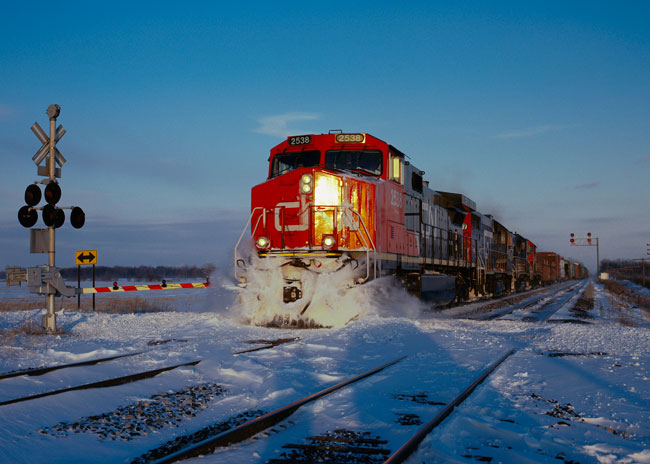 CN Rail has blamed extremely cold and snowy weather for the delays on its system in Western Canada. PHOTO: CN

CALGARY—Grain shippers and producers are raising concerns about a growing backlog of rail shipments that they say is leading to lost sales and unreliable exports.

The latest figures from the Ag Transport Coalition, which represents several grain associations, said that car order fulfilments from Canada’s two major railways was 38 per cent during the week of Feb. 12.

The numbers show Canadian Pacific Railway Ltd. delivered 66 per cent of the rail cars that grain shippers ordered, while Canadian National Railway Co. deliveries dropped for the sixth consecutive week to 17 per cent.

“It’s a dire situation. What we’re seeing is not enough rail cars, not even close to enough empty rail cars being placed at grain elevators for loading,” said Sobkowich.

The backlog means grain elevators filling up at the farm, and emptying silos at ports leading to penalties for delayed shipments, he said.

The situation is hitting Canada’s reputation as a reliable shipper and could hit farmers who are relying on the timely payments, said Grain Growers of Canada president Jeff Nielsen.

“It’s hitting producers in the pocketbook, because if you can’t move the grain you don’t get paid,” he said.

“We have to be very competitive when we’re selling our grains on the worldwide market, and the world is looking at us, saying that we’re not a reliable shipper any more.”

Grain producers say passage of Bill C-49 would be an important step in solving the problem by creating penalties for delayed railway shipments as well as allowing more competition on the rail lines.

The rail companies have blamed a harsh winter for the delays, with CP Rail chief executive Keith Creel saying at a conference last week that the company saw more snow on its lines in the first 10 days of January than it saw in the entire month last year.

CN Rail chief financial officer Ghislain Houle said at the same conference that the cold and snow have restricted operations and forced it to cut train lengths by more than half, but that recently improving weather has helped boost speeds.

The Montreal-based railway has also faced criticism from the oil and gas sector, with the head of energy services firm Halliburton complaining about slow deliveries for frac sand disrupting its operations.

Analyst Walter Spracklin of RBC Capital Markets said recently that service at CN Rail had deteriorated to the point where clients were switching their cargo to its Calgary-based rival CP Rail.

CN Rail spokeswoman Kate Fenske said in an email that the company is taking issues to increase capacity and reduce pinch points including its record $3.2 billion capital program this year and by adding more staff and equipment.

“We recognize that the challenging operating conditions we are facing, coupled with the high demand levels we are seeing, are having a real impact on our performance and the service we’ve provided.

“We have taken action to improve our current fluidity and resiliency through the acquisition and short-term leases of locomotives and the hiring and training of hundreds of new employees.”

Fenske said that while recent winter weather and maintenance work have created pinch points, overall the company has moved only three per cent less Western Canadian bulk grain than its three year average and that it had its second best January on record.