Despite the forecast boost in duck production, Canada will remain a fringe global player in a market dominated by China 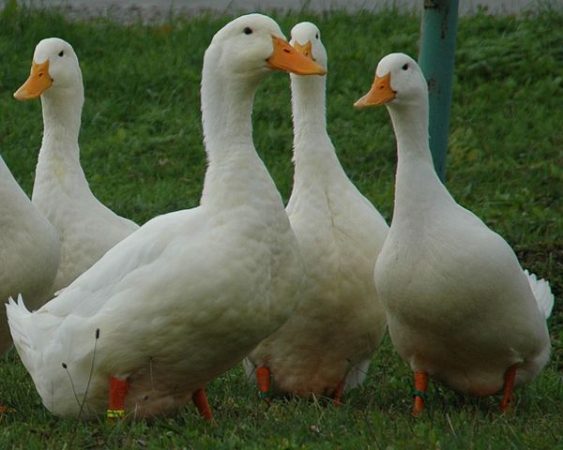 Pekin ducks are one of the world’s most popular breeds of domestic duck. PHOTO: Martin Backert, via Wikimedia Commons

MONTREAL—Despite a surge in cheap imports, Canadian duck producers are planning to boost production due to growing consumer demand spurred on by celebrity chefs and the reopening of the Mexican market.

Brome Lake, the country’s oldest processor of domestic Pekin duck, is spending $30 million to build a facility in a former beef plant in Asbestos, Que., that will double its annual production capacity in five years to four-million birds.

A popular delicacy in Asian communities, duck is increasingly being sampled by new consumers.

“The young generation is trying more and more different products and duck is one of them,” said Claude Trottier, president of Brome Lake, founded in 1912.

Although pricier than chicken, the red meat protein is increasingly being selected as an alternative to beef, which has experienced steep price increases.

Brome Lake hopes to begin production in November, four months after a fire destroyed its processing operations, offices, distribution facilities and a retail store in Knowlton, Que. Processing has temporarily been shifted to a co-owner’s operations in Indiana.

Duck is a Canadian niche cuisine, but it’s a popular item in Quebec for Brome Lake.

The processor aims to spur sales in the rest of the country beyond Chinatowns by offering a wider array of its products, including fresh meat, leg confit, sausages, duck pie and fondue meat _ all of which are readily sold in Quebec supermarkets.

It also plans to educate consumers at supermarket tastings about the protein which has traditionally been served only at Christmas and other seasonal holidays.

The company additionally aims to expand its export business, which took a 35 per cent hit in 2004 after several countries temporarily banned fresh duck imports following an outbreak of Avian influenza in British Columbia.

An agreement with Mexico announced in March could help Canadian producers to progressively regain more than $3 million in annual sales of fresh chicken, turkey and duck, Ottawa said.

King Cole Ducks, Canada’s largest duck processor, also plans to target Mexico as the company eyes growing exports to offset the impact of Brome Lake stepping onto its turf in provinces outside Quebec.

“If they double their production, we’ll be looking for new markets,” said CEO Debbi Conzelmann.

She added Ontario’s market is growing with the arrival of immigrants from duck-eating countries such as Russia and the Czech Republic.

King Cole, which processes 2.5-million birds a year, has opened a Toronto farm fresh store. It has also started a duck school that offers monthly cooking classes that quickly sell out, which Conzelmann attributes to the increasing use of duck on popular culinary TV food shows.

Despite the forecasted boost in duck production, Canada will remain a fringe global player in a market dominated by China.

Canada’s substantially higher cost of production and strong safety regulations prevent the country from being globally price-competitive despite the quality of the birds, said Conzelmann.

The situation also makes it harder to compete domestically with cheap imports, especially from Hungary, which has flooded the Canadian market over the last two years.

“They’re on target to probably take over a third of the country’s production this year at the rate they’re growing,” said Conzelmann.

Canadian consumers are being misled, she added, because Hungary is able to export their ducks, cut or cook the pieces, repackage and relabel them as “Made in Canada.”

“Canada is being used as a dumping ground and our government is not really doing anything about it,” he said.