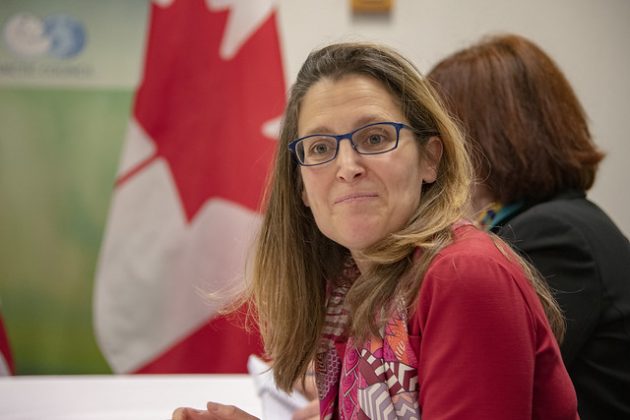 OTTAWA — The minority Liberals made another pitch Jan. 27 for cross-partisan co-operation on a key priority for the government in the upcoming sitting of the House of Commons: passing the new US-Mexico-Canada free trade deal (USMCA).

Deputy Prime Minister Chrystia Freeland called passage of the new NAFTA a pivotal moment for Canada in a letter she sent to leaders of the Opposition parties.

She said while no one expects anything other than a “full, frank, and vigorous debate,” she urged them not to hold up the deal.

“Canadian parliamentarians understand that, politics aside, the interests of Canadians come first, last, and always. I am confident this applies to you and to every member of your caucus, as it does for the Prime Minister, me, and every member of our caucus, too,” she wrote in the letter.

“Therefore, I ask that we work together, as colleagues, to put Canada and Canadians first, and get this important work done without undue delay.”

Freeland’s letter comes as the House of Commons resumes Jan. 27 for its first lengthy sitting since the October election returned the Liberals with a minority government. Legislation to ratify the trade deal is expected within days.

Prime Minister Justin Trudeau stressed to his MPs this week that the new mandate is not like their last, and they’ll need to work hard to win the support of their opponents to get anything done.

“Bickering, grandstanding, petty politics – none of these things create jobs. They don’t make anyone’s retirement safer, or our environment cleaner. Collaboration, dialogue, and constructive debate, however, can,” he said. “Common ground does exist in this Parliament, but it’s up to us to build on it.”

On the new NAFTA, the Liberals do have common ground with the ardently pro-trade Conservatives, who control the most Opposition seats.

The party’s international trade critic said it doesn’t intend to play games with the trade deal bill as businesses need it to get ahead.

But that doesn’t mean it gets a completely free pass, said Randy Hoback. Previous trade deals have left some industries behind, and that shouldn’t happen again, he said.

“We’re going to focus on the results of this deal. We can’t change it, the reality is we can’t make amendments to this type of legislation because they’d have to go back and renegotiate,” he said.

“But what we can do is look at the sectors and industries that are negatively impacted by this deal and not make the same mistakes we’ve made in the past.”

Hoback said the Tories want to hear from those groups, and figure out what the Liberal strategy is to mitigate the issue. Whether that work happens before the deal gets signed will be open for negotiation, he said, but it needs to be done.

With Conservative support, the bill could sail through, but the Bloc Quebecois and New Democrats say they won’t make that easy.

The Bloc has raised concerns the deal does not provide the same protections for Quebec’s aluminum industry as it does for the steel industry and Ontario’s auto-manufacturing sector and wants the text fully studied and debated.

The New Democrats say the fact that the deal was negotiated behind closed doors means due diligence needs to be done.

“We’re still meeting with industry and workers and talking to Canadians about what this deal will mean for them,” said NDP Leader Jagmeet Singh.

Conservative Leader Andrew Scheer said he has appreciated that the Liberals have reached out on major recent developments, like the spread of coronavirus and the deaths of Canadians in Iran following a plane crash.

But he’s not committing to the same overall tone of co-operation the Liberals are pitching.

“The Liberals will try to buy off the support from the other parties,” he said, after meeting with his MPs on Jan. 26.

“That means a lot of wasteful spending. It means an even bigger government that’s more and more involved in the economy and making decisions for people’s lives. So we will oppose those types of things.”

— With files from Mike Blanchfield