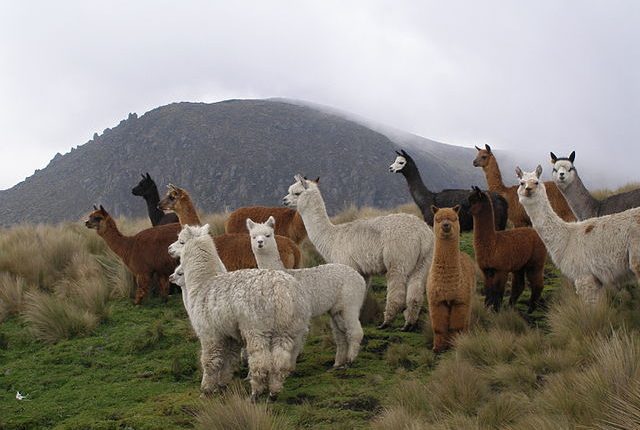 High in the Andes, Peruvian alpaca farmers are struggling to keep their herds from starving

SAN ANTONIO DE PUTINA, Peru—After three days of heavy snowfall and bone-chilling temperatures, Mateo Mullisaca watches as one of his alpacas falls to the ground in agony on his farm almost 16,400 feet (5,000 metres) high in Peru’s Andes.

“Without water and without food, the weak ones die,” the 62-year-old shepherd says as the animal takes its final breath with vultures lurking nearby.

Peru’s government has declared a state of emergency in the southern Andes and promised $3 million in relief amid a bitter cold snap that has killed 50,000 alpacas. Authorities fear that if the mercury continues to hit minus 9 Fahrenheit (minus 23 Celsius) as many as 300,000 camelids could die, devastating the largely indigenous families who raise them.

Mullisaca, who last year lost about a fifth of his herd of 150 animals, says promised food and corrals haven’t arrived in large enough numbers to protect them from the cold. Sheep, the only other animal that can survive on the grassland plateaus, are also dying in large numbers as evidenced by Mullisaca’s loss the night before of five lambs a few hours after entering the world.

Peru is the world’s largest producer of alpaca wool, an almost silky natural fiber coveted by the world’s top designers, and has about 4 million of the camelids. But in stark contrast to the high prices charged by the likes of Armani and Gucci is the daily struggle against the elements and poverty by the thousands of shepherds whose livelihood depends on the trade.

The high-altitude rural hamlets where alpacas have been raised for centuries are among the most-deprived in Peru. The more than 120,000 families that make a living from shearing the soft, featherweight fiber earn as little as $1,200 a year, which works out to less than half of Peru’s minimum wage.

Every alpaca that dies represents a major financial loss, explains Isaac Caparo, a veterinarian who specializes in camelids. Each animal’s wool can be sheared only once a year and a female gives birth to a single offspring once every 11 months. Every winter freeze destroys the tough grasslands the animals feed on and almost no crops can survive in the nutrient-poor soil.

When alpacas die, families butcher the animals for their meat. But eventually they go hungry and their children can become sick due to an almost-complete lack of heating. Two months into the cold season an estimated 14,000 children in the Andes have suffered from respiratory illnesses and 105 died, according to government figures. The majority of the cases are in the Puno region where the alpacas are concentrated.

“Sometimes they have six relapses in a single winter,” said Cirilino Suxso, the only medical professional at a health post 14,750 feet (4,500 metres) high in the mountains.

Such is the case of 20-month-old Ismael Ccallo, whose mother attempts to lower a dangerously high fever, so far unsuccessfully, with herbal infusions.

“He doesn’t want to eat and when he lies down in bed he can’t breathe, he just cries” said Sofia Ccallo early one morning as she prepares to brave the snowy conditions outside her adobe and grass-roofed hut and take her son to the closest hospital two hours away by motorcycle.

There have been a few private attempts to give farmers a bigger share of the $150 million Peru exports in alpaca fleece every year. Most sell fleece, on average, for a little over $5 a kilogram and the fleece passes through several intermediaries before arriving on the shelves of luxury stores where a jacket made of the wool can fetch as much as $5,000.

But the inequities persist and many children of alpaca farmers have been driven from their homes to work in illegal mines or Peru’s cocaine trade.

“Every year with the winter freezes and cold temperatures the plants and animals die,” said Miguel Hadzich, head of a group affiliated with Peru’s Catholic University that has built 600 homes with heating for alpaca farmers. “A scandal breaks out and then the state looks the other way.”