Some 112 cars and a mid-train locomotive rolled uncontrolled for about a kilometre. The runaway was "the result of human error" 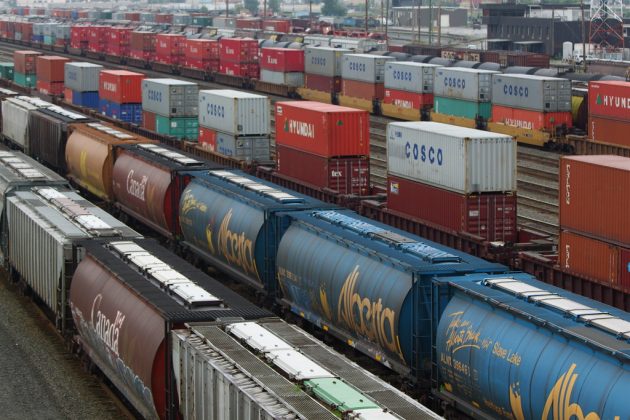 MINNEDOSA, Man. – A Winnipeg newspaper says it’s learned that a train with more than 100 loaded grain cars careened down a hill through the southwestern Manitoba town of Minnedosa last year.

The runaway happened Jan. 1 on a line that is increasingly moving petroleum products, as railways make up for stalled pipeline projects.

The Transportation Safety Board says the train was heading up a hill in the town of 2,500 when the crew encountered difficulty after a knuckle connector that links cars broke, initiating the train’s emergency brakes.

The board says some 112 cars and a mid-train locomotive rolled uncontrolled for about a kilometre or more before stopping on their own.

CP says it has fixed the problem.

It’s unclear how fast the train was going as the safety board censored that information under a confidentiality clause, which the Free Press has appealed. CP officials refused to reveal the train’s speed.

The TSB said the crew fixed the issue and tried charging the air brakes but didn’t allow enough time. The train moved for one second before pulling apart, possibly because the throttle wasn’t correctly set.

The crew inspected another broken knuckle without applying handbrakes or retainers, which the board said was required under the situation.

The crew was standing beside the train, despite a rule requiring them to secure it if they’re not at the control panel.

The board said after fixing the knuckle link, the engineer noted that the remainder of the train was rolling back downhill. He tried to catch up with and couple onto it, but was unsuccessful.

The board said prior to the incident the crew failed to let a supervisor know they had used the emergency brakes, even though that is standard protocol. It also said staff made the wrong decisions despite CP dispatching a senior officer to oversee the repairs.

The safety board flagged improperly securing the train, not using handbrakes and not radioing in that the crew had initiated the emergency brakes. It asked Transport Canada to review CP’s training program and make sure staff understand the rules.

The regulator followed up “and verified the railway was in compliance with rail-safety regulations,” wrote spokesman John Cottreau.

CP spokesman Jeremy Berry said the runaway was “the result of human error and CP took immediate action to educate its employees.” It’s unclear if staff members were punished.

The safety board has flagged insufficient training in several rail incidents, including one in which a runaway train carrying gasoline reached speeds of up to 48 km/h for nearly five kilometres north of Toronto in June 2016. (Winnipeg Free Press)