Mexico ratified the deal in June while the Canadian government said it was waiting on the U.S. 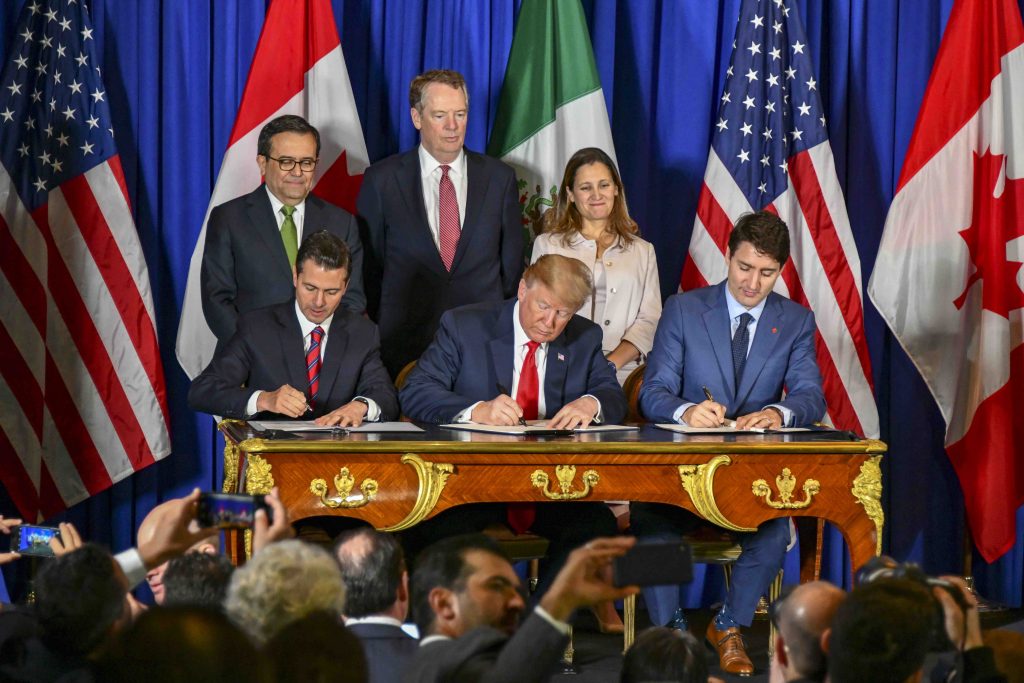 OTTAWA—An agreement has been reached on a North American free trade deal, with all three countries set to sign the agreement today.

U.S. House Speaker Nancy Pelosi said in Washington this morning that congressional Democrats were supportive of the changes, which paves the way for implementing legislation to finally be tabled in Congress.

Mexican President Andres Manuel Lopez Obrador also said in his daily news conference in that representatives from each country would sign the deal.

The U.S.-Mexico-Canada Agreement was originally signed by the three countries last year, but U.S. ratification has been stalled for months as congressional Democrats and organized labour bickered with Mexico over labour rights as well as the deal’s treatment of steel and aluminum.

Prime Minister Justin Trudeau said little as he arrived for a weekly cabinet meeting in Ottawa.

“We are working very hard,” he said in French, when asked if there was an agreement.

The new breakthrough follows U.S. labour unions approving Mexico’s proposal to phase-in a tighter definition of what constitutes North American steel as some concessions on enforcing the agreement’s provisions on labour in the Mexican auto sector.

“For the first time, there truly will be enforceable labour standards—including a process that allows for the inspections of factories and facilities that are not living up to their obligations,” he said.

U.S. House Speaker Nancy Pelosi called it a “victory for the American worker.”

“This is a day we’ve all been working to and working for,” she said.

The Democrats announced support for the deal the same day they introduced articles of impeachment against U.S. President Donald Trump.

Richard Neal, chair of the U.S. House Ways and Means committee, did not offer a timeline for when the deal will be tabled. He instead said the text would be first shared with stakeholders for feedback.

Pelosi did say Democrats are hoping to get moving before the end of the congressional session on Dec. 20.

The new deal is sure to stoke anger in some circles, with the Canadian and U.S. aluminum and automotive industries in particular angry that Mexico had not agreed to tighten the definition of what constitutes North American aluminum like it did with steel.

Reports indicate Mexico has accepted—with a five-year phase-in period—a U.S. demand to tighten the definition of North American steel in a section of the agreement dealing with where cars and their parts can be said to originate.

Products that officially originate in North America get more favourable treatment than ones that originate abroad but come through one of the countries in the agreement.

However, Mexico has said it would not accept the same tighter definition for aluminum because the raw materials are not produced in Mexico.

There had been concerns the agreement, which aims to update the 25-year-old North American Free Trade Agreement, would not be approved before Congress disperses until 2020 and its focus shifts to next fall’s presidential election.

Critics, including Trump, labour unions and many Democratic lawmakers, branded NAFTA a job-killer for America because it encouraged factories to move south of the border, capitalize on low-wage Mexican workers and ship products back to the U.S. duty-free.

Mexico had ratified the deal in June while the Canadian government has said it is waiting to ratify the agreement at the same time as the United States.