China is looking to strengthen ties with other economic partners as its trade relationship with the U.S. deteriorates, but free trade talks between China and Canada have slowed 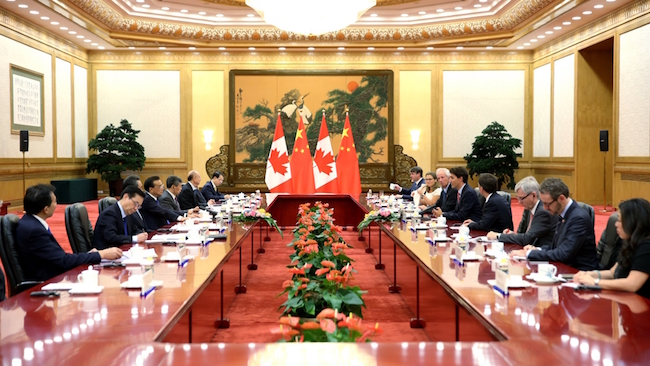 TORONTO—China’s ambassador to Canada said Monday he hopes to make progress on a free-trade agreement with Canada and others amid his country’s rising trade tensions with the United States.

“On the background of unilateralism and trade protectionism, China sincerely hopes we can speed up the relevant negotiations process of bilateral…trade agreements,” Lu Shaye said, speaking through a translator, in an interview at the Apparel Textile Sourcing Canada trade show in Toronto.

U.S. President Donald Trump slapped 25 per cent tariffs on $34 billion in Chinese imports in July. Taxes on an additional $16 billion are set to kick in this week and China is counterpunching with tariffs of its own.

The U.S. government is holding six days of hearings starting Monday in Washington on Trump’s next round of proposed tariffs of 10 per cent to 25 per cent on $200 billion in Chinese goods that could kick in as early as next month.

Meanwhile, free trade talks between China and Canada have slowed as Canada has insisted on a progressive trade deal that would also cover some labour, environment, gender and governance issues.

The ambassador said there was little progress on issues that aren’t directly related to trade and he hopes they don’t disrupt future discussions.

“China and Canada still remains some differences on specific issues, but I think that it is not related to trade, and I don’t hope such kind of issues will influence the future talks and negotiations between China and Canada.”

Trade relations between the two countries deteriorated after Canada blocked the $1.5-billion takeover of Aecon Group Inc. construction firm by a Chinese company in May, citing reasons of national security.

Lu said Chinese companies will be more cautious about investing in Canada after the federal government blocked the deal, and that he still doesn’t understand what was behind the move.

Canada could soon also impose safeguard measures to block the dumping of steel imports after the U.S. imposed tariffs on steel and aluminum on a number of countries, including Canada.

The federal government last week began exploring how best to address industry concerns that U.S. tariffs are causing a surge in steel imports.

Ottawa is seeking input from producers, users and the public as it considers imposing “safeguards” on the import of several steel products. The measures, if applied, could include quotas, surtaxes or a combination of both.

The White House has complained that Canada has opened a back door to the American market, allowing for an invasion of bargain-basement steel into the U.S. from places like China.

Lu said China represents only a small percentage of Canadian steel imports but his country will be watching Canada’s measures closely.