China hits back at criticism of its detention of Canadians [UPDATED] 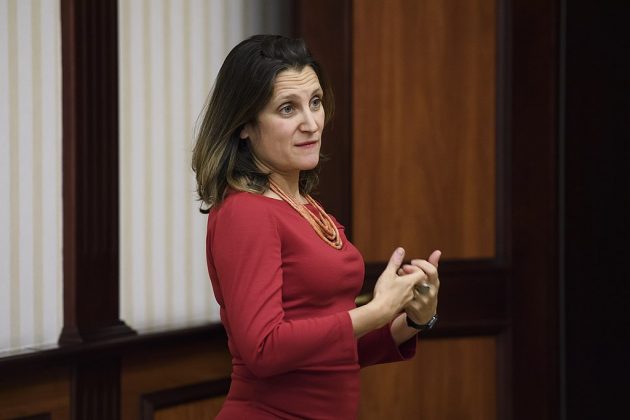 BEIJING – China on Thursday rejected an accusation by Canada’s foreign minister that its detentions of Canadians pose a threat to all countries.

“I think your foreign minister may be in a hurry, and can’t help speaking without thinking,” foreign ministry spokeswoman Hua Chunying said in response to a question from a Canadian journalist on what threat China poses to Canada.

She said Canada instead poses a threat by detaining a Chinese citizen for “no reason.” She was referring to the arrest of Chinese telecom executive Meng Wanzhou in Canada at the request of the United States.

“It is understandable that Canada is a little worried, but we hope it will avoid speaking freely without thinking because its reputation and image would be badly damaged by such behaviours,” Hua said. “And such remarks cannot help settle the issue, either.”

Meng’s arrest while she was travelling through the Vancouver airport on Dec. 1 created a growing diplomatic rift. Meng is the chief financial officer of Chinese telecom giant Huawei and the daughter of its founder. She is wanted by the U.S. in an investigation into Iran sanctions violations.

China detained two Canadians shortly after her arrest in what Western analysts see as an attempt to pressure Canada to release her.

Canadian Foreign Minister Chrystia Freeland said earlier this week that China’s “arbitrary detentions of Canadians … represent a way of behaving which is a threat to all countries.”

China also sentenced another Canadian, Robert Schellenberg, to death on Monday in a sudden retrial of his drug-smuggling case.

The U.S. State Department called the death sentence “politically motivated.” A statement for U.S. Secretary of State Mike Pompeo said he and Freeland spoke Tuesday and “expressed their concerns about the arbitrary detentions and politically motivated sentencing of Canadian nationals.”

Canada has embarked on a campaign with allies to win the release of ex-diplomat Michael Kovrig and entrepreneur Michael Spavor, who were detained 10 days after Meng’s arrest. They were arrested on vague allegations of “engaging in activities that endanger the national security” of China.

Canadian Prime Minister Justin Trudeau’s office said Thursday that Trudeau spoke to Singapore Prime Minister Lee Hsien Loong about the “detention of two Canadians in China, the application of the death penalty to a third Canadian in China, and the importance of safeguarding international norms, including diplomatic immunity, judicial independence and respect for the rule of law.”

Many countries have expressed support for Canada.

The Spanish government said in a statement Thursday that it was concerned about the death sentence against Schellenberg and expressed concern about the arrests of Kovrig and Spavor.

McCallum, the envoy to China, said Canada has done a great job getting allies to support Canada’s position. But he added, “I really think that’s just the beginning.”

Freeland said the detained Canadians will be at the top of her agenda when she visits Davos for the World Economic Forum next week.