Canada is vying for one of two seats for a two-year term that would begin in 2021. But it depends if Norway and Ireland would have it 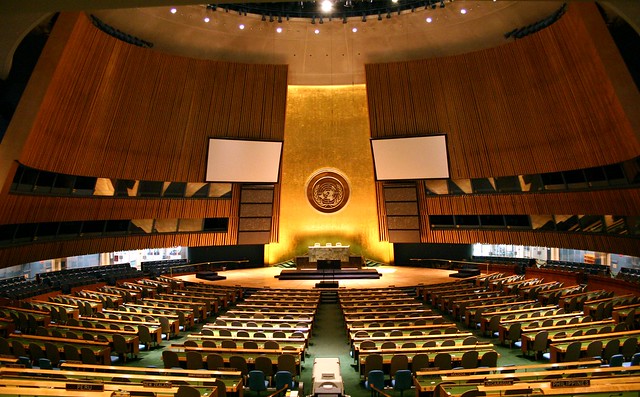 OTTAWA – There will be more than one Canadian election campaign unfolding this week.

A second round of politicking is taking place in New York City, where a delegation of former prime ministers, aided by a senator with a wealth of diplomatic experience, will push Canada’s bid for a temporary seat on the United Nations Security Council.

Canada is vying for one of two seats for a two-year term that would begin in 2021, but it faces a tough fight from Norway and Ireland.

The vote will be next June, but with the federal government in “caretaker” mode, Global Affairs Canada has dispatched former prime ministers Jean Chretien and Joe Clark to the annual UN General Assembly meeting of world leaders in place of incumbent Justin Trudeau.

The former Liberal and Progressive Conservative leaders are part of a delegation led by a top-ranking public servant, Marta Morgan, the deputy minister of foreign affairs.

“What the government wants to do is continue to advance the Canadian candidacy for the Security Council,” Boehm said in an interview.

“It’s a great opportunity with everyone there, to advance the cause, to make our case. It’s no secret it’s going to be a close-run election for the Security Council.”

Last September, Trudeau appointed Boehm to the Senate as an Independent after a long career as a diplomat that included ambassadorships and deputy-minister-level positions in Ottawa.

He was also Canada’s ambassador to Germany in 2010 during Canada’s most recent unsuccessful run for a Security Council seat. Germany had no trouble winning the two-thirds support of the General Assembly needed for a seat, but Canada fell short to tiny Portugal for the second seat and ultimately withdrew.

The then-Conservative government of Stephen Harper was heavily criticized for the loss and it was only with the election of Justin Trudeau in 2015 that Canada declared its intention to seek a temporary seat once again.

Boehm said Conservative Leader Andrew Scheer has said publicly that he would not abandon the campaign if he is elected. Scheer said he would continue to pursue the seat in an interview earlier this year with the Globe and Mail newspaper.

Many analysts believe Canada has an uphill battle within the UN group of countries in which it’s competing known as the Western European and Others Group, or WEOG. It is one of five regional groupings in the UN that nominate candidate countries to serve on the Security Council.

Boehm said the group, which also includes Australia, New Zealand and Israel, does not agree on an acclaimed slate of candidates, which forces a secret-ballot election among UN countries. Others, such as the African and Latin American groups, usually agree on which of their number to nominate, avoiding an election.

“It’s not a good group to be in, in the sense there always seems to be competition with another European coming in at the last moment … you never know how this is going to go. The competition is tough.”

Boehm said and the other members of this week’s delegation have been travelling in recent months to foreign gatherings to press Canada’s case.

In August, he travelled to a summit of Pacific Ocean island states that included 18 countries, including Australia and New Zealand, to make the pitch. Boehm said he plans to meet again with those countries this week, as well as representatives of Caribbean states.

“A lot of work goes into campaigns. Because the vote is secret, you never know where you stand,” said Boehm.