Canada prepares to get dragged into U.S. election as Trump launches opening salvo

Presumptive Republican nominee blasts NAFTA as U.S. gears up for what is likely to be gritty general election 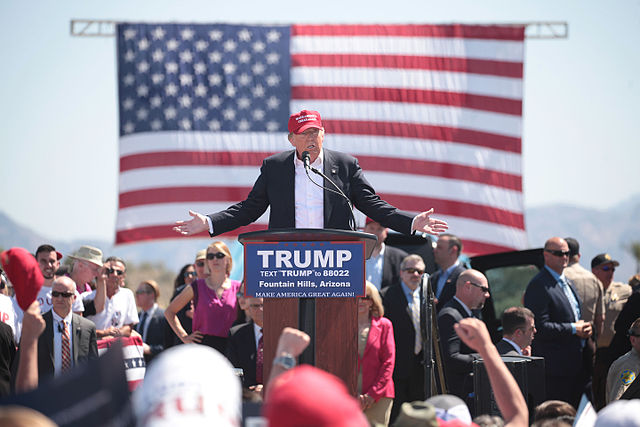 With primary season coming to an end, the two presidential front-runners are beginning to gear up for the general election. PHOTO: Gage Skidmore, via Wikimedia Commons

WASHINGTON—The very first words out of Donald Trump’s mouth in the unofficial commencement of hostilities in the 2016 U.S. general election included a salvo pointed at a trade deal involving Canada.

The presumptive Republican nominee had just dispatched his primary opponents, then pivoted toward his likely rival Hillary Clinton, and immediately linked her to NAFTA.

“She will be a poor president. She doesn’t understand trade,” Trump told a victory rally Tuesday.

“Her husband signed, perhaps in the history of the world, the single worst trade deal ever done. It’s called NAFTA. And I was witness to the carnage (while campaigning).”

You are about to be dragged into a six-month referendum about what’s responsible for the plight of America’s middle class—and Mexico, especially, will feel the tug.

Prime Minister Justin Trudeau, speaking Wednesday at a news conference in Ottawa, sounded nonplussed. Protectionist language is common in elections, and tends to dissipate after, he said.

So far, it’s been the centrepiece of Trump’s campaign.

Trump has made clear his diagnosis for what ails the modern economy: It’s foreigners taking American jobs. Feckless politicians signing bad trade deals. And special interests funding those politicians, then shipping jobs off to places like Mexico.

There’s a debate right now among ideological right-wingers—to support or not support a candidate whose diagnosis of the economy some find as abhorrent as his bedside manner.

It’s not very conservative to threaten a 35-per-cent import tax on companies that outsource jobs, as Trump proposes. He’s also been wishy-washy on abortion, and has not only donated to Clinton’s campaigns but invited her to his latest wedding—although he’s now calling for her arrest over her use of emails.

In this race, the former wedding guest is heavily favoured over the groom.

Trump loses in about nine out of every 10 polls against Clinton, and numerous Republicans are predicting a massacre: “If we nominate Trump, we will get destroyed,” said Sen. Lindsey Graham.

“And we will deserve it.”

A new CNN survey shows him 13 points behind Clinton.

His comeback strategy hinges on those NAFTA references.

Trump’s next campaign stop illustrates it; he’ll be in coal country Thursday. He used his victory speech to promise that coal miners in West Virginia, Ohio and Pennsylvania would get their jobs back.

Never mind that it’s cheaper, lower-emitting natural gas, combined with climate-change regulations, that have slashed U.S. coal jobs by a whopping one-third in the last couple of years.

He’s promising to turn back the clock to better times. His campaign slogan, after all, is “Make America Great Again.”

She proposes a $30-billion plan to retrain miners. She angered some when she told a recent event that, “We’re going to put a lot of coal miners and coal companies out of business.” She said later she’d stated it inartfully.

This coal debate is a snapshot of a broader election issue.

It’s how to deal with a painful, long-term trend. Working-class Americans have suffered. Mortality rates are up, driven by suicide, drug and alcohol abuse, and heart disease.

People with only a high-school diploma have, according to Pew Research, seen their share of the national income plummet 22 per cent since 1971.

Clinton’s proposed solution: tax hikes on the wealthy and more government programs—like retraining, tuition assistance, and a parental leave program like other countries have.

Trump is telling voters they can have more.

He promises tax cuts. And more military spending. And protected social programs like old-age pensions. He’d even pay down the national debt, he says.

More than one observer has noted that achieving all of this would require bending the laws of the natural universe.

So take some of the campaign talk with a grain of salt.

Including on NAFTA—which would be extremely difficult to cancel, then replace with new tariffs, and disrupt the modern supply chains that involve building a single product in several countries.

“One of the things we see in any electoral campaign, including electoral campaigns here in Canada, is a bit of rhetoric around protectionism,” he said. “That tends to dissipate a little bit once the election has come and gone.”

Trump has actually been vague on what he’d do with NAFTA; he’s proposed ripping it up, but wasn’t so explicit in his major foreign-policy speech last week.

Another trade deal could have its fate play out this year—the 12-country Trans-Pacific Partnership. Trump clearly opposes it. Clinton expresses mild opposition.

One Canada-watcher in Washington urged the country against rushing to ratify TPP, and use the coming months instead to seek a side deal with Japan on auto parts.

Above all else, said Christopher Sands of Johns Hopkins University: “Lay low.”

“Don’t make an enemy of Trump. Don’t get him insulting you guys. This too may pass. And if it doesn’t pass, (and he becomes president), not being the focal point of his critique of global trade gives you the option to make a different kind of deal.”


Related Stories
Trudeau projects calm on eve of U.S. election, but much is at stake for Canada
Uncertainty abounds after landmark Trump election victory
Canada-U.S. trade not broken—so no need for Trump to fix it, Freeland says
Pugnacious Trump of campaign trail reemerges in Carrier plant victory lap