Canada hopes to dazzle The Donald with data on NAFTA benefits

Canada's foreign affairs minister says data is part of the government's efforts to demonstrate NAFTA's upside to President Trump, who has publicly savaged the trade deal 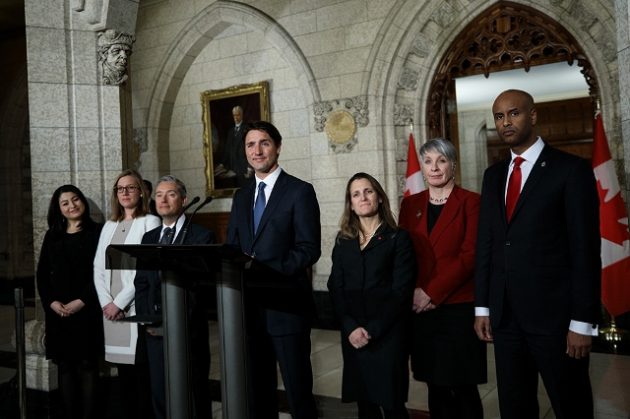 OTTAWA—The federal government is using a deep mine of digital data to map out what it says are the economic benefits to the United States of its unfettered trade with Canada, says Foreign Affairs Minister Chrystia Freeland.

Freeland on May 23 told an audience in Mexico City that the government’s trove of data drills down into individual U.S. congressional districts to show the local upside of the trading relationship with Canada.

The data is all part of the Liberal government’s full-court press on the Trump administration to demonstrate the benefits of the North American Free Trade Agreement. President Donald Trump has savaged NAFTA and threatened to scrap the three-country trade pact if it can’t be renegotiated to his satisfaction.

Canada, in response, has mounted an information campaign on Trump and his cabinet, as well as Congress, state and local governments to underline the mutually beneficial trade between the countries.

The Trudeau government has repeated the talking point that 35 U.S. states call Canada their top customer, while nine million Americans depend on Canada for their jobs.

Freeland added a new set of numbers to illustrate the government’s work on that front during a day-long conference of politicians and business leaders in Mexico City.

She said that since Trump’s January inauguration, there have been 235 meetings between Canadian and U.S. government officials; 110 Canadian political visits to the U.S; high-level meetings with Trump and 13 of his cabinet secretaries.

Canadians have also met 115 members of Congress and 35 state governors or lieutenant-governors, she added.

“If you’re an American official or legislator, it’s been hard to avoid a Canadian. Everywhere they turn, we try to be there,” said Freeland.

The message was the same every time, she said: that Canada and the U.S. enjoy a balanced and mutually beneficial relationship.

“We have a lot of numbers to back that up. We’ve broken it down to specific congressional districts,” she said.

Freeland recalled a meeting she had with Paul Ryan, Speaker of the House of Representatives, in which she apparently dazzled him with data about his Wisconsin district.

Mexican Foreign Affairs Secretary Luis Videgaray said Mexico has been mounting a similar political offensive in Washington that has resulted in “countless” meetings with American counterparts.

But unlike Canada, he said Mexico isn’t actually counting the number of meetings, adding: “that would be a good practice, we should start counting how many.”

Freeland chimed in, saying: “I have a spreadsheet in my office, Luis.”

Despite the emphasis on the U.S., Freeland reassured the Mexicans that Canada is committed to a three-way renegotiation of NAFTA.

She downplayed any suggestion the NAFTA renegotiation might lead Canada to do a side deal with a hard-bargaining Trump administration _ something Mexico doesn’t want.

She said it is simply common sense that the 23-year-old agreement is “modernized” by all three members.

“We don’t even feel this is a contentious issue. It’s just a matter of common sense. NAFTA can be modernized only with the agreement of the three parties.”

Some groups, such as the Canadian American Business Council, have said that if the going gets too tough between Mexico and the U.S., Canada should consider going it alone on a separate deal with the U.S.

Last week, the U.S. officially served notice of its intention to renegotiate NAFTA, triggering a 90-day consultation before the start of formal talks later this summer.

“Thank you for being in Mexico,” he said. “It says a lot that you are here.”

Freeland told reporters after the conference that with the U.S. starting its 90-day clock, Canada’s consultations would become more structured and formal, building on previous meetings with business, indigenous groups, unions and the provinces.

Freeland offered little hint of what Canada’s negotiating strategy would be, but said one principle would be to “do no harm” to a pact that has already proven its worth.