Home to rival plane maker Embraer, Brazil said the Canadian "subsidies" are affecting the competitiveness of the industry. Bombardier's CEO, however, argued all countries, including Brazil, help prop up their aerospace sectors 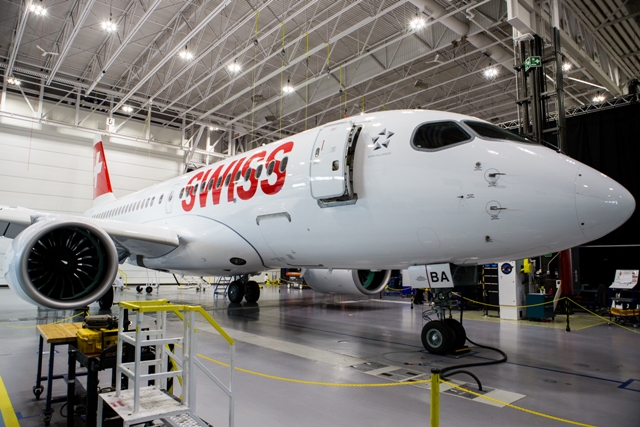 Brazil had threatened to file a complaint with the WTO late last year, but the latest federal funding appears to have spurred the South American country ahead. PHOTO: Bombardier

MONTREAL—The federal government’s aid to Bombardier has triggered a new trade battle with Brazil, which launched a formal complaint Feb. 8 with the World Trade Organization over Canadian subsidies to the aerospace industry.

“Canadian subsidies artificially affect the international competitiveness of the sector, in a manner inconsistent with Canada’s WTO obligations,” the Brazilian government said in a statement.

Brazil said Bombardier received at least US$2.5 billion in government support last year and that additional contributions may hurt the country’s interests by further distorting the aerospace industry.

Last year, Bombardier received a US$1-billion investment for the CSeries passenger jet program from the Quebec government in exchange for a 49.5-per-cent stake. The company also sold a 30 per cent stake in its railway division to pension fund manager Caisse de depot for US$1.5 billion.

Related: Bombardier cash reignites provincial, industry fights over government fundingOn Tuesday evening, Ottawa announced it will provide $372.5 million in new loans to Bombardier to be paid in instalments over four years to support the Global 7000 and CSeries aircraft projects. Although the loans are interest-free, the government said it expects to earn a return, as it has done with past loans, through royalties for planes sold.

Under such an arrangement, Bombardier has so far paid $741 million into Ottawa’s coffers on $586 million in federal loans in the 1980s and 1990s, according to the company. Bombardier is expected to begin paying royalties to the federal government in April for selling seven CSeries last year after the company received $350 million in loans in 2008 in support of the aircraft.

Sao Paolo-based Embraer, a fierce rival of Bombardier’s, said it supports its government’s complaint. CEO Paulo Cesar Silva said the subsidies given to Bombardier have helped the development and survival of the CSeries and allowed the Montreal company to sell the plane at artificially low prices.

“It is essential to restore a level playing field to the commercial aircraft market and ensure that competition is between companies, not governments,” he said in a separate news release.

Brazil, which had threatened in December to launch a trade complaint, said the move will give it access to additional information about support to Bombardier.

“I am very much prepared to fight for what we are doing,” he said.

“This is the best plane in its class, so people are finding ways to come after us,” he said.

The company added Wednesday that all countries, including Brazil, help their aerospace sectors through tax breaks, royalties and research and development. It pointed to Brazil’s US$588 million in assistance to Embraer in 2014 through the Brazilian Development Bank for the development of its Legacy 500 business jet and another US$1.5 billion for development costs of the KC390 aircraft.

A spokesman for Champagne said Wednesday after Brazil’s trade complaint was announced that the federal government is confident that the loans respect international law.

The Brazilian government said the timing and location of talks with Canada should be agreed upon by the two countries in the coming weeks.