Total cargo passing through the seaway fell to a seven-year low last year, but shippers are anticipating a rise in volumes as the seaway opens for 2017 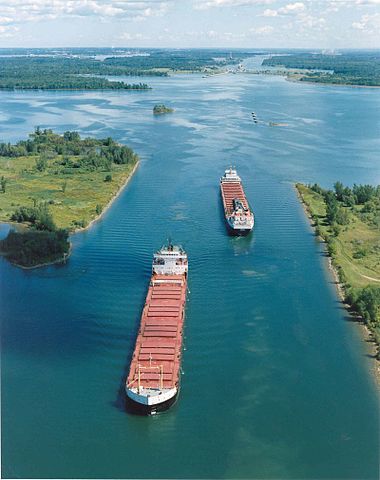 MONTREAL—After the worst cargo season in years, shippers traversing the Great Lakes are expecting a rise in volumes this season as the St. Lawrence Seaway opened this week, but not enough to give them cause to celebrate.

The shipping industry is facing a global economic slowdown that will take a couple of years before sustained growth resumes, says the incoming CEO of Canada Steamship Lines in Montreal.

“I don’t see anything that’s going to be a game changer very quickly,” says Louis Martel, who takes over one of the largest shippers on the Great Lakes next month.

“We need another China or an India or something like this to really get us back to a very, very upbeat shipping world.”

Total cargo passing through the seaway fell to a seven-year low last year, with tonnage slipping 3.4 per cent to 35 million tonnes, according to the St. Lawrence Seaway Management Corp. An increase in grains and liquid bulk volumes failed to offset a 13 per cent drop in iron ore and nearly 10 per cent decreases in coal and dry bulk goods.

Slowing growth in China has curtailed international cargo demand, which hasn’t been able to keep up with a surge in the number of vessels that were the result of a shipbuilding boom between 2002 and 2008.

Martel says volumes through the Great Lakes are looking to be up slightly this year amid improved commodity prices and higher hopes for grain shipments, some of which have been left over from last year’s bumper crop. That could allow ships to operate for the entire navigational season, unlike last year when some didn’t leave port.

Fuelled by higher prices, iron ore volumes are expected to be up as Canadian producers export more to Asia and supply an anticipated boom in infrastructure in North America, including US$1 trillion in promised spending by U.S. President Donald Trump. Still, Martel estimates Canadian Steamship Lines will ship a quarter of the iron ore it did compared with its peaks years of 2012 and 2013.

Seaway CEO Terence Bowles expects traffic will increase in line with the two to 2.5 per cent GDP growth forecast by economists, but that won’t be strong enough to return to the yearly average of 40 million tonnes.

“The seaway is the bellweather for the economy so basically if the economies improve we’re going to improve, it’s as simple as that,” he said following the seaway’s official opening.

Peter Winkley, chief financial officer for Algoma Central Corp., says he is optimistic business will pick up this year after the St. Catharines, Ont.-based shipper saw volumes fall 19 per cent in 2016.

“Compared to where we were at this time last year, it’s certainly looking a lot better,” Winkley says.

While upheaval in the ocean shipping business has led to the bankruptcies of large players such as South Korea’s Hanjin, Canadian shipping on the Great Lakes is on a more solid footing, says William Bennett, senior analyst with London-based consultancy Vessels Value.

He says shipping in the St. Lawrence Seaway is a specialized, niche sector, giving it a degree of insulation from the economic forces hitting the high seas business. Shippers of dry bulk on the Great Lakes, for instance, are likely to have a better season than their ocean-going counterparts.

“It’s not very difficult for the market to come up from where it is now, given how low it is,” he says.

“Everyone is so desperate to see some sort of light at the end of the tunnel, (but) there’s a lot of very, very big uncertainties underpinning the market at the moment.”