Officials were expected to hammer out a recommendation for President Trump, who has sent mixed messages about the deal

April 19, 2017  by Jill Colvin And Seth Borenstein, The Associated Press 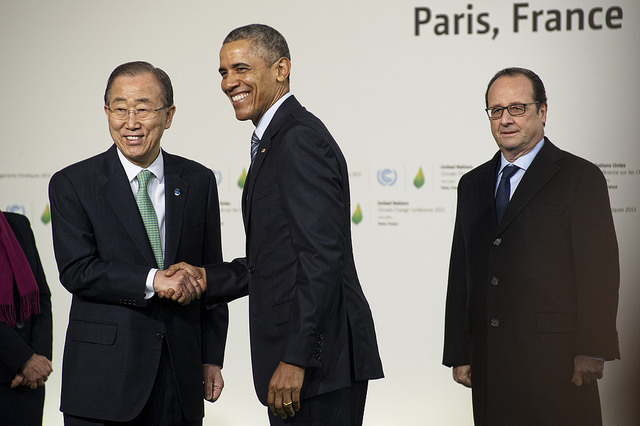 The U.S. was a supporter of the Paris climate deal under former president Barack Obama, but Trump has sent mixed messages about the agreement

WASHINGTON—A White House meeting April 18 where President Donald Trump’s aides were to hash out whether to keep the U.S. as part of an international agreement to reduce climate-warming carbon emissions has been postponed.

Spokeswoman Sarah Huckabee Sanders blamed the postponement on scheduling conflicts among some of the advisers who were expected to attend the meeting. She said the meeting will be rescheduled.

Officials had planned to discuss options, with the goal of providing a recommendation to Trump, according to an administration official who spoke on condition of anonymity despite the president’s criticism of the use of anonymous sources.

The non-binding international agreement was forged in Paris in December 2015 and allowed rich and poor countries to set their own goals to reduce carbon dioxide. It went into effect last November after the U.S., China and other countries ratified it.

Trump’s top advisers are divided on the issue. Some, including Environmental Protection Agency head Scott Pruitt, are eager for the U.S. to leave the deal.

“Paris is something that we need to really look at closely, because it’s something we need to exit, in my opinion,” Pruitt said in an interview last week with Fox News Channel’s “Fox & Friends.” ”It’s a bad deal for America. It was an America second, third or fourth kind of approach.“

Trump pledged during the presidential campaign to pull out of the Paris accord, but has wavered on the issue since he won the presidency.

He told the editorial board of The New York Times in an interview last year that he was “looking at it very closely…. I have an open mind to it. We’re going to look very carefully.”

Under the agreement, the U.S. pledged to reduce its annual greenhouse gas emissions in 2025 by 26 to 28 per cent below 2005 levels, which would be a reduction of about 1.6 billion tons of annual emissions. Besides continuing Obama’s efforts to reduce U.S. heat-trapping gases, Trump has two general options.

One option is to pull the United States out of the non-binding agreement, which Obama enacted without U.S. Senate ratification. It typically takes countries four years to pull out of new international treaties, but because Obama enacted the accord as part of the 1992 Rio de Janeiro treaty, Trump could pull out of the older, broader treaty in one year.

Another option is to do nothing. Trump could publicly badmouth the treaty, but not formally withdraw from it. If the U.S. stays part of the agreement, which 125 nations or groups of nations have already ratified, and fails to reach its goal, technically nothing happens. There is no climate court, no enforcement action.

And because the agreement already went into force, nothing the United States does—even pulling out—can nullify the accord. It is in effect.

Nonetheless, a withdrawal or public announcement that the U.S. is abandoning its efforts to fight man-made climate change could spark repercussions individually from other nations, said Nigel Purvis, who was the top U.S. State Department environmental diplomat when George W. Bush pulled out of the 1997 Kyoto climate treaty.

Trump has already reversed some of the former president’s efforts to scale back carbon emissions to try to halt climate change, including restrictions on coal plants and drilling.

White House spokesman Sean Spicer has said Trump will make up his mind on the Paris agreement before a summit of the Group of Seven leading industrial nations in Taormina, Italy in late May.