Pattern Energy has plugged in a new 184 megawatt project outside Tumbler Ridge B.C. increasing the province's wind capacity 37 per cent 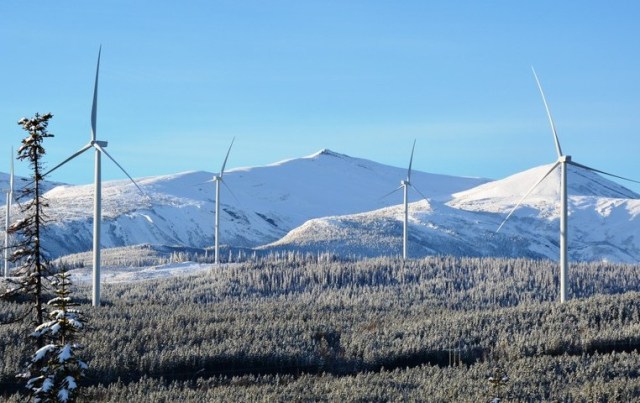 Situated in the Rocky Mountain foothills northeast of Prince George, the project includes 61 turbines and has capacity to produce 184.6 megawatts of electricity—or enough to power the equivalent of 54,000 B.C. homes.

The new wind project is B.C.’s largest and increases the hydro-reliant province’s overall wind capacity 37 per cent to 673.6 MW, according to the Canadian Wind Energy Association.

Pattern Energy started work on the wind farm in late 2014, employing an average of 150 people through more than two years of construction.

To make the most of varying wind speeds, wind shear and inflow angles along the site’s ridgelines, designers developed a novel layout for the wind farm.
The Meikle project also includes two different GE turbine models that use different rotor sizes and hub heights to take advantage of the geography.

The new wind project is operating under a 25-year power purchase agreement with BC Hydro and is built on crown land. It’s in an area hard-hit by the mountain pine beetle and past forestry activity, which Pattern Energy says lessened the project’s environmental impact.