A clean-sweep for the Republicans in the U.S. election means there's a lot of uncertainty facing the world today. Much of that will come home to roost in Canada. Here are a few ways the election will impact our economy

November 9, 2016  by Alexander Panetta, The Canadian Press, with files from Canadian Manufacturing.com staff 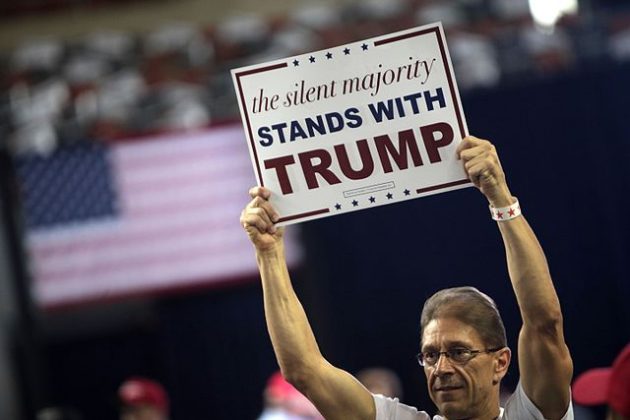 Trump has promised to bring manufacturing jobs back to American soil, earning him a dedicated following, but others are less certain about how he plans to deliver. PHOTO: Gage Skidmore, via Wikimedia Commons

This is a complex, developing story. Check back for updates throughout the day.

WASHINGTON—As it turns out, America is not what many people thought it was.

When an unpredictable nationalist gets elected to lead the globe’s biggest superpower, the political shockwaves will inevitably be felt by the next-door neighbour.

The particularly abrupt plunge of the Mexican peso signalled expectations that the southern neighbour might feel the most effects. The loonie fluctuated too. International markets opened with losses—Japan’s stock exchange the Nikkei opened down 5.2 per cent and, at press time, tumbled further to -5.36 per cent.

Indeed, Trump’s ascendancy to the White House could affect Canada in multiple ways.

An example of areas potentially affected include climate-change measures, trade, oil pipelines, Syrian refugees, labour and capital flows, military partnerships and high-level relations—some to Canada’s possible benefit, and others not.

”Canada has no closer friend, ally and partner than the United States,” Trudeau said. ”The relationship between our two countries serves as a model for the world.”

Trudeau’s unwillingness to make statements against Trump during the campaign, which looked prudent at the time, now seems downright prescient. If he had made unsavoury comments about the president-elect, the ramifications would have certainly been harsh.

Still, the relationship will see some changes.

“Canada is going to be left with very, very, very expensive climate policies,” said Laura Dawson of the Wilson Center’s Canada Institute. ”It will be a disincentive to investment and manufacturing.”

Trade deals
Trump has repeatedly demanded a renegotiation of NAFTA—or he says he’ll cancel it.

That’s sure to cause jitters to the north, given that Canada sends three-quarters of its exports south. Several people interviewed recently downplayed the potential drama. Trump has the power to scrap NAFTA, but they said it’s mitigated by several factors.

First is the possibility he’d back away from the promise, or seek only a minor renegotiation. Then, even if he cancels NAFTA, several trade experts have said Congress might have to actually reinstitute tariffs for it to have a serious impact. Further, Dawson said, the prior Canada-U.S. trade deal could still cover many parts lost from NAFTA.

One Canadian official expressed doubt a while back that Congress would assist in strangling the economy with trade barriers: “I’ve not met one Republican who thinks you can rip up NAFTA… They all roll their eyes.”

If he does scrap NAFTA, Dawson said, industry groups that remained silent during the election would suddenly start roaring.

”All of those folks are going to be lined up saying, ‘Are you kidding me? Do you know how much of our livelihood is dependent on open borders and trade between these three countries?’ If you were to impose a 30 per cent tariff on Mexico the economic impact would be immediate, swift and would represent even more job losses… There would be huge backlash.”

One other trade dynamic has changed: Polls suggest Trump’s rhetoric has made the Republican party more hostile to trade than Democrats. It remains to be seen whether protectionism and Buy America provisions become increasingly popular in Washington.

Boost for the oil sector?
Canada’s oil industry will appreciate another stated policy of Trump’s

He has said several times he favours construction of the Keystone XL pipeline, killed by Obama. His campaign literature suggested he’d invite TransCanada Corp. to reapply for a permit. Then again, he’s made difficult-to-decipher comments about demanding a larger share of the profits for the U.S.; American companies and local governments always stood to profit from it.

If he’s serious about proceeding, it could be a bit of welcome news for the Canadian government. Trudeau had supported the pipeline, and now faces political dilemmas at home related to new pipelines.

Immigration and security
Trudeau differs dramatically with Trump on refugees.

The Prime Minister went to the airport to welcome newcomers from Syria. Trump refers to these people as a Trojan horse. His son even tweeted a comparison to a bowl of Skittles, where only one bad one can kill you.

Canada works closely with the U.S. on intelligence and screening of foreigners. It’s an integral part of ongoing plans to thin the Canada-U.S. border and facilitate trade. It’s far from certain a Trump administration would be keen on more refugees next door.

This is in sharp contrast with the Democrats, who wanted to be more welcoming. The current administration even looked to emulate Canada’s system for privately sponsoring refugees _ another U.S. project potentially in limbo.

“This openness to foreign refugees could…. (affect) confidence in each other’s practices,” Dawson said, adding that it could have a ripple-effect touching trade-and-border initiatives.

Reverse brain drain
Even before the election, CNBC reported that the number of Americans searching for jobs in Canada had increased a whopping 58 per cent since last year on the jobs-posting platform Monster Worldwide.

It said the most-searched job for Americans looking to work in Canada was engineer.

Young, college-educated Americans like those who populate Silicon Valley are among the most hostile to Trump. The federal government has been working to rebrand Canada as more than a resource producer, but also a player in the digital economy.

Will Canada go poaching for brains, as well as investors?

The head of a major multinational investment company, Laurence Fink, told Trudeau within earshot of media, in a New York meeting a few months ago: ”A lot of confusion here in this country in investing. There’s probably even greater opportunities in the stable environment of Canada.“

There’s already some debate among Americans about heading north. The writer Jonathan Chait expressed annoyance at people contemplating this, in a piece for New York magazine on election night titled: ”Forget Canada. Stay and Fight for American Democracy.“

Military and Defence spending
The Defence portfolio could become an irritant.

Trump has threatened to leave allies to their own devices if they fail to meet the agreed-upon NATO target of spending two per cent of GDP on the military. Canada is nowhere close and recently said it had no current intention to get there.

Here’s what Trump says about NATO allies: ”The countries we are defending must pay for the cost of this defense, and if not, the U.S. must be prepared to let these countries defend themselves.”

Dude-plomacy
Trudeau’s affection for the current president was obvious during their meetings. He’ll soon face a less-predictable interlocutor.

Trudeau bit his tongue, mostly, during the campaign but did make clear his displeasure with Trump’s talk of a Muslim ban. Trudeau dedicated his first United Nations General Assembly speech to the danger of nationalist populism.

Members of his government expressed concern, privately, about a Trump win.

Now they’ll be dealing with a president whose election drew a celebratory tweet from France’s National Front. Also, a president whose default stance on trade irritants during the campaign was to vow punishment of trading partners.

It’s unclear how Trudeau will handle a counterpart with whom he disagrees more often; and might struggle to read. Complicating matters, the Trudeau team has far fewer connections with Trump’s rag-tag campaign outfit, which frequently underwent staff overhauls and relied heavily on political rookies.

The Trudeau PMO had ready-made connections with top allies to Hillary Clinton. Trudeau’s top aides, for instance, knew her campaign chair. Now they’ll be making different contacts. As for who the new team might include, a recent report suggested Trump was weighing making Newt Gingrich his secretary of state and Rudy Giuliani his attorney general.

One final benefit working for Ottawa: Trump and his team have said virtually nothing negative about Canada during the campaign—unlike the constant complaints about the neighbour to the south.