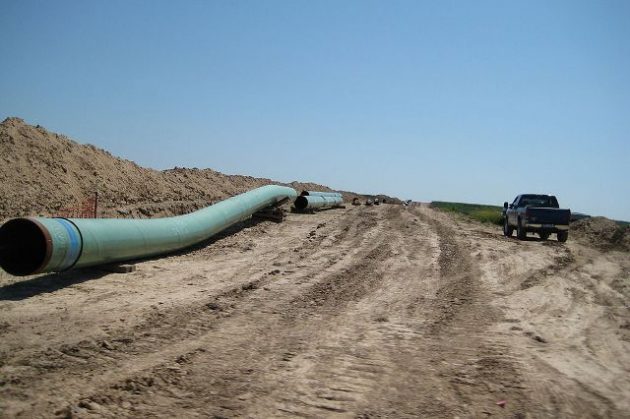 In Canada, the recent oil price crash has distracted attention from the controversial Coastal GasLink pipeline project. Buried in that dispute is the recent history of TC Energy, Coastal GasLink’s parent firm.

TransCanada changed its name to TC Energy just after the January 2019 Unist’ot’en stand-off between the RCMP and land defenders in support of a Coastal GasLink injunction. It was also within 10 days of the Unist’ot’en house group of the Wet’suwet’en First Nation alleging violations of their territorial rights at the UN Permanent Forum on Indigenous Peoples.

While TransCanada says the change would better represent its increasing activities in Mexico and the United States, it also distanced the firm from controversial projects, among them the Keystone XL project that aimed to expand the Keystone pipeline system in Canada and the U.S.

Keystone XL has been a key target of global environmental activism against the oilsands and, for a time, resulted in Alberta oil being labelled the Earth’s most carbon-intensive and dirtiest fossil fuel. It also turned public attention to the violation of Indigenous territorial rights in which North American pipeline projects are mired.

As opposition to Alberta’s oilsands, associated pipelines, environmental injustice and carbon emissions have ramped up in Canada over the past 15 years, so has North American production of natural gas for energy and export. In this shift, TC Energy’s role as a conduit for U.S. natural gas to Mexico is notable.

Canada’s negative brand image in Latin America emerges from a long history of the Canadian government backing its extractive sector at home and abroad. TC Energy’s activities across North America are heavily financed by Canadian entities, including Export Development Canada, private banks and a network of influential board members who lobby the Canadian government for financial and diplomatic support.

Mexico had been a net exporter of hydrocarbons to the United States for three decades. But the U.S. shale-gas boom and Mexican energy reform shifted energy trade dramatically and helped foster Mexico’s increasing dependence on American natural gas.

The pattern is reminiscent of Mexico’s abrupt dependence on U.S. maize following the 1994 North American Free Trade Agreement (NAFTA). Mexico shifted from being self-sufficient in this food staple to becoming dependent on imports. The same process has transpired in hydrocarbons, compromising Mexican energy sovereignty.

The privatization of Mexico’s energy sector, which proceeded at a slow creep for decades and accelerated drastically in 2013, has been a flashpoint for protest throughout the country due to high fuel costs.

It helped elect opposition leader Andrés Manuel López Obrador to the Mexican presidency in 2018 and factored into the renegotiation of NAFTA.

TC Energy is among the firms facilitating the growing American and Canadian involvement in the Mexican oil and gas sector. A TransCanada representative was the co-chair of the intergovernmental Canada-Mexico Partnership’s energy sub-committee in 2016.

While TransCanada described a welcoming environment when it shifted activities to Mexico, this has soured with increasing opposition, including Indigenous mobilization, against pipeline projects in Mexico.

Shortly after López Obrador’s election in 2018, but before he took office, TransCanada suspended pipeline projects in four states due to protests. López Obrador has renegotiated terms associated with various pipeline contracts, including TC Energy, reportedly saving Mexico US$4.5 billion dollars.

Shared risks across the continent

In both Canada and Mexico the ecological and financial risks of pipeline projects are shouldered by local residents and pension holders.

As Canadian investment in Mexico’s energy sector has increased, the global financial hazards of locked-in hydrocarbon consumption, which are risky given their financial implications for carbon mitigation measures, have also been more broadly distributed to Mexicans.

In northeastern British Columbia, earthquakes from natural gas fracking threaten dams and pose a risk to the area’s residents, according to the Canadian Centre for Policy Alternatives. The carbon emissions from the first phase of the LNG Canada project that would receive fracked gas via Coastal GasLink are estimated at 3.45 megatonnes per year.

This is a large portion of the province’s future emissions. British Columbia has said it would cut emissions by 80 per cent by 2050, to about 13 megatonnes.

The Coastal GasLink project also poses risks to those whose pensions finance the project if the project is unable to proceed.

In December, TC Energy sold a 65 per cent interest in Coastal GasLink to a consortium involving AIMCo (Alberta Investment Management Corp.) and KKR, a private U.S. financial company operating in partnership with the National Pension Service of Korea. AIMCo manages the funds that secure future income for more than 368,000 public sector employees and pensioners in Alberta and the rest of Canada.

Given TC Energy’s trajectory over the past decade this is problematic.

TC Energy’s behaviour in Wet’suwet’en has resulted in a nationwide crisis. The Canadian government and Canadian firms should not facilitate the export of those behaviours to Mexico.