Most of Syncrude's workforce has returned to the oilsands mining complex and the upgrader is still operating despite the fire, said a Syncrude spokesperson 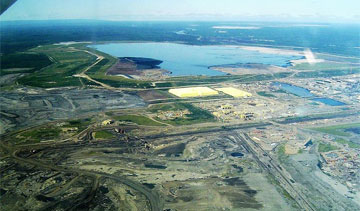 FORT MCMURRAY, Alta.—A fire that broke out at a Syncrude oilsands site in northern Alberta was the result of a supply line that broke and leaked light oil, a company spokesman said.

Crews were allowing the blaze at the Mildred Lake oilsands upgrader to burn itself off of flammable chemicals, 24 hours after it erupted on Tuesday afternoon, because that’s the safest way to dispose of the residual material, Will Gibson said.

“The fire was the result of a line failure which cause treated naphtha (a light oil) to leak,” Gibson said, adding that the air is being monitored.

Most of Syncrude’s workforce has returned to the oilsands mining complex and the upgrader is still operating despite the fire, he said.

“The remainder of our operation is in a safe and stable position,” he said. “Flaring will continue to ensure excess natural gas and hydrogen is safely managed.

“This flaring will on occasion also consume excess sulphur dioxide and hydrogen sulphide in a safe manner.”

Syncrude staff, the Alberta Energy Regulator and the province’s Occupational Health and Safety division are investigating. Wood Buffalo RCMP said they would assist but there is no indication it was a criminal matter.

One worker was injured and taken to hospital in nearby Fort McMurray in serious but stable condition on Tuesday. The worker remained in hospital Wednesday afternoon, Gibson said.

“Yesterday was a tough day for our organization and especially difficult for one employee and his family. Our thoughts and prayers are with our colleague,” Syncrude CEO Mark Ward said in a news release. “Syncrude would like to extend its thanks to our industry and community partners for their assistance, as well as everyone who has expressed their support during this difficult time.”

The fire happened at one of the two hydrotreaters at Syncrude’s upgrader, Gibson said. The units are designed to start the upgrading process by separating heavy bitumen crude oil into components.

The incident raises questions about Syncrude’s operational reliability after it posted some of the best results in its 40-year history last year.

TD Securities analyst Menno Hulshof said in a note to investors that Syncrude averaged more than 98 per cent utilization in the second half of 2016, an improvement attributed by some to Suncor Energy increasing its stake in the ownership consortium from 12 per cent to 54 per cent through buyouts of two other partners.

He said Syncrude’s 2017 utilization guidance of 84 per cent, which includes downtime for planned maintenance, will probably fall along with production levels because of the fire.

A fire at the Mildred Lake upgrader in August 2015 slashed output at the facility by about 80 per cent before it returned to normal production by October.