A year after Alberta's NDP took power, province seems pointed in new direction, but for many, shift in economic strategies remains controversial 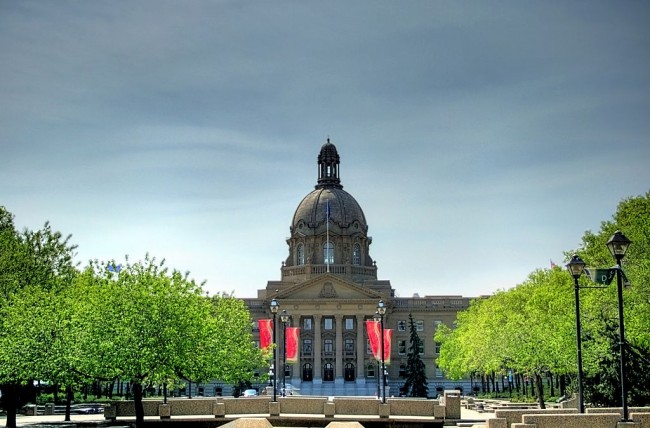 A year ago, Alberta saw the first change in provincial government in almost 44 years, as more than 50 NDPers were elected to the legislature. PHOTO: Winterforce Media, via Wikimedia Commons

EDMONTON—Premier Rachel Notley and her NDP government blow out the candle this week on the one-year anniversary of an historic election win followed by a year of change Alberta has not seen in a generation.

In 12 months, Notley has laid the foundation to fundamentally remake the economy—and the identity—of her province at a time when it has been knocked to the canvas by low oil prices.

It’s a blueprint of bold measures underwritten by mammoth debt.

Notley says the enormity of the plan hits her at times, perhaps when she’s out for a run or is recounting the bullet points while vetting a speech.

“When I have just a teeny bit of downtime, that’s when I’ll think to myself, ‘This is good. This is something I’ll be proud of for the rest of my life.’ And that’s a good way to think about the work that you’re doing,” she said in an interview.

“I feel very confident that it was the right decision. I really do.”

The plan is to come out the other side with a greener economy, higher oil prices via a pipeline to a coast, more knowledge-based industries, better care for seniors, better lives for those on minimum wage, improved health care and enough schools so that kids aren’t stacked up like cordwood in portables.

If it fails—or gets cut off at the knees should the NDP lose the next election—it becomes a quixotic lost cause smoldering in $58 billion worth of debt in a province that virtually owed nobody anything a decade ago.

The last year has been an exercise in running, limping, and sometimes falling headlong into a ditch for Notley and government members, most of whom are strong on politics and public service, but green on governing.

It has been a vertiginously steep learning curve for all Albertans.

The night of May 5, 2015, saw the first change of provincial government in almost 44 years. More than 50 NDPers were elected and premier Jim Prentice and his Progressive Conservatives fell to third-party status.

The NDP inherited a flatlining economy as oil prices hit rock bottom and sucked billions of dollars out of the bottom line.

Opponents urged Notley to go the route that Ralph Klein did in the 1990s: cut back on services, reduce the red ink and wait for oil prices to recover.

Instead, the NDP ramped up infrastructure spending to $34 billion over five years, increased taxes on wealthier Albertans, boosted the corporate income tax and announced a plan to boost the minimum wage by almost a third to $15 an hour by 2018.

The centrepiece came in November: a climate-change plan that will impose a broad-based carbon tax on heating and gasoline to pay for green initiatives as Alberta caps emissions on oilsands and phases out coal-fired electricity.

It was a bumpy road at times.

The government raised fears it was trying to bust up traditional farm life when it botched the communications plan for new farm safety legislation.

There’s been a lot of anger and threats directed toward Notley and her cabinet members. Police laid charges when one caller phoned the office of Environment Minister Shannon Phillips and allegedly threatened to shoot everyone over the carbon tax.

The caucus had to figure out the house. In one instance, when it appeared the New Democrats were going to lose a minor but embarrassing vote, they illegally entered the chamber after voting began, forcing a rare do-over.

Debate in the house has been less about debate and more a call and response dirge of Armageddon.

Almost daily, Opposition Wildrose Leader Brian Jean updates the number of oilpatch layoffs and condemns the NDP plan as an engraved invitation for investors to move out.

Notley in response labels the Wildrose plan as a clarion call for cuts that would lay cataclysmic waste to health care and education.

She said she follows the debate and the criticism, but doesn’t internalize it.

“Even before I ran as premier, I’ve always been of the view that you don’t read your own press.

“Ground yourself in what you think is the right thing to do, and the merits of your decision-making and your research and your analysis, and move forward on that basis.