The executives of California-based ICON Aviation are devastated by the death of the retired Blue Jays great, but it's not the first fatal accident on the ICON A5's record 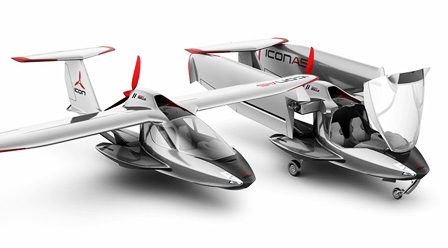 VACAVILLE, Fla.—Executives and employees of the company behind the small sport plane that retired pitcher Roy Halladay was flying when he crashed near Florida say they are devastated to learn of his death.

California-based ICON Aviation issued a Nov. 7 statement saying, “We have gotten to know Roy and his family in recent months, and he was a great advocate and friend of ours.”

Halladay took ownership of the plane less than a month ago, and posted on social media that he had dreamed about owning an A5.

Halladay, the 40-year-old former Blue Jays and Phillies pitcher, was among the first to fly it.

In one of many enthusiastic tweets about the plane, Halladay said it felt “like flying a fighter jet.”

Rolled out in 2014, the A5 is an amphibious aircraft meant to be treated like an ATV, a piece of weekend recreational gear with folding wings that can easily be towed on a trailer to a lake where it can take off from the water.

“The way that a lot of people described it is a Jet Ski with wings,” Stephen Pope, editor-in-chief of Flying magazine, told The Associated Press.“It’s really a plaything.”

The man who led the plane’s design, 55-year-old John Murray Karkow, died while flying an A5 over California’s Lake Berryessa on May 8, in a crash the National Transportation Safety Board blamed on pilot error. The NTSB will also investigate Halladay’s crash to determine the cause.

Pope said “the plane itself is great,” but he had concerns about Halladay, a new pilot with little flying time, taking the craft out over water at low altitude, though the plane was marketed as a craft that could do that.

“They still think that that’s the way the airplane should be flown, and there are people in aviation who completely disagree with that,” Pope said. “They think you should not have a low-time pilot flying low over water. That’s a recipe for disaster.”

Low flying was part of the problem when Karkow, the designer, crashed, according to federal investigators. Karkow was killed along with passenger Cagri Sever, the company’s newly hired director of engineering.

The NTSB blamed pilot error for the crash, saying Karkow mistakenly entered a canyon while flying too low, causing the plane to strike the canyon wall.

Another A5 crashed in April, making a hard landing in the water off Key Largo, Florida, injuring the pilot and his passenger. The pilot told investigators the plane descended faster than he expected.

Halladay’s ICON A5 went down around noon off the coast of Florida, Pasco County Sheriff Chris Nocco said.

The sheriff’s office marine unit responded and discovered Halladay’s body in shallow water near some mangroves. No survivors were found.

Police said they couldn’t confirm if there were additional passengers on the plane or say where it was headed.

ICON Aviation said in a statement that the company would assist the NTSB in every way possible with its investigation, and that its executives and employees are “devastated” by Halladay’s death.

“We have gotten to know Roy and his family in recent months, and he was a great advocate and friend of ours,” the statement said.

Here’s a company video advertising the A5