by Jenny Barchfield and Peter Prengaman, The Associated Press  June 6, 2016

Rio de Janeiro—the site of the 2016 Summer Olympic Games—is choked by raw sewage and waste, but a look to cleaning efforts across Guanabara Bay shows just how bad the failure has been 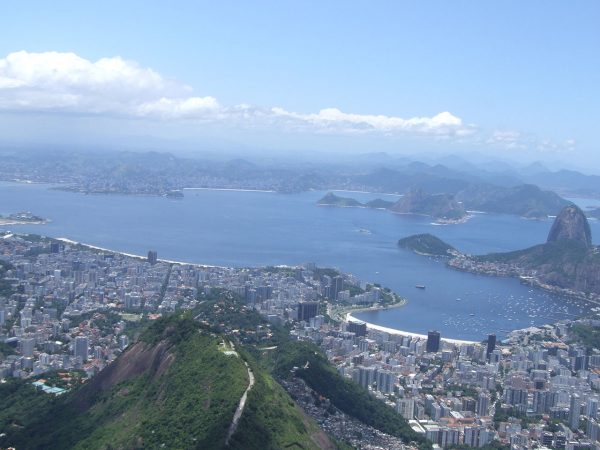 View of Guanabara bay with Niteroi at the back and Botafogo cove in the front right. PHOTO: Dkoukoul, Wikimedia Commons

NITEROI, Brazil—With thousands of litres of raw human sewage pouring into the ocean every second from Rio de Janeiro, August’s Olympic Games have thrust into the global spotlight the city’s spectacular failure to clean up its waterways and world famous beaches. But just across the Guanabara Bay from Rio, the sister city of Niteroi is showing that a real cleanup is possible.

In Niteroi, 95 per cent of sewage is treated and authorities say they are on track for 100 per cent within a year, even though Rio’s failure to do its part means that sludge still flows in from across the bay. Rio has not only broken promises made to fix its sewage problem in time for the upcoming Summer Games, but the state has been downplaying expectations, even suggesting it might be 2035 before a full cleanup happens.

Niteroi’s success underscores key factors that stand in stark contrast to Rio: privatization of sewage management, major investment in infrastructure and a high level of accountability and collaboration between the city government and the utility to define targets and meet them.

In Rio’s Olympic bid document seven years ago, authorities pledged that an extensive cleanup—which included collecting and treating 80 per cent of the city’s sewage—would be one of the games’ enduring legacies, but it simply never happened: An ongoing study commissioned by The Associated Press has shown that rowers, sailors and marathon swimmers will be exposed to waters so filthy they’re roughly equivalent to raw sewage.

Why did Niteroi succeed while Rio failed? For starters, it doesn’t help that Jorge Briard, president of the Rio state-owned utility known by its Portuguese acronym as CEDAE, says he isn’t sure where those Olympic bid targets came from.

“’Why didn’t you achieve the 80 per cent that was stated?’ That’s the recurring question,” Briard said in an interview with The Associated Press. “I always say, ‘I don’t know where the 80 per cent came from. Certainly not from CEDAE. Here, no one mentioned 80 per cent.’ Mentioning percentages is something very dangerous.”

The situation in Niteroi in 1997, when a private sanitation company won a tender to manage the city’s sewage system, was even worse than Rio’s is now. About a third of the population didn’t have running water and more than two-thirds of sewage went untreated.

Over the past 15 years, the city has rolled out new treatment plants and hooked up hundreds of thousands of residents, whose waste flowed untreated into the area streams and rivers that run into the bay.

“City Hall got to the point where it had no other alternative but to look to the private sector for someone who could solve the big problems,” said Carlos Henrique da Cruz Lima, planning director at Aguas do Brasil, the sanitation company.

It was a bold move. Similar situations existed—and continue to exist—throughout Brazil, and public utilities still outnumber private ones here by around nine to one. Until a decade ago, the legislative framework for private utilities was murky, leading to a legal battle over whether Aguas do Brasil had the right to operate in Niteroi. The case dragged on for two years before Brazil’s highest court ruled in the company’s favour.

The company has invested 500 million Brazilian reais (US$ 141 million) to expand the city’s then-sole sewage treatment plant and build another eight units _ as well as, crucially, to lay the pipes to transport the sewage.

With an estimated 95 per cent of residents now on the sewerage grid, Niteroi ranks No. 5 nationally in terms of sewage treatment, according to basic sanitation watchdog Trata Brasil. The plan is to reach universal coverage, bringing the remaining 30,000 to 35,000 residents onto the grid within the coming year, Lima said.

By comparison, Rio treats about half its sewage _ despite multibillion dollar cleanup efforts and broken promises stretching back more than two decades.

Sanitation experts say Niteroi has the advantage of being relatively small. The population is around 500,000 people, compared with Rio’s 6 million.

That dynamic makes oversight and enforcement easer, cutting down on corruption in building contracts and management, long a scourge in Latin America’s most populous nation.

Amid sharp criticism of the failed cleanup efforts in Rio and the ongoing AP investigation, local officials have been dialing down expectations.

Last year, Rio Governor Luiz Fernando Pezao acknowledged “errors” had been made in the bay cleanup. At an event at the governor’s palace days after the July 30 publication of the AP investigation, an official with the latest cleanup task force pushed the target date back to 2035. Pezao is currently on medical leave and the governor’s office didn’t respond to requests for comment.

An independent study commissioned by The Associated Press over the last year has revealed alarmingly high levels of viruses and sometimes bacteria from human sewage in the bay as well as the city’s other Olympic waterways. A risk assessment based on the AP data found those who ingest three teaspoons of water have a 99 per cent chance of being infected by a virus, raising alarm among some elite athletes, although whether they actually fall sick depends on many factors. Several athletes fell ill while training last year.

The consequences of sewage exposure are more serious for the broad swath of Brazil’s population for which regular exposure to untreated waste is an inevitable fact of life. Public health experts say children exposed to sewage fall ill more often, are less likely to attend school regularly and fully develop intellectually, and ultimately end up getting significantly lower-paying jobs than those from similar socio-economic backgrounds who grow up with basic sanitation.

Niteroi’s vice-mayor, Axel Grael, said the private company’s accountability has been a key factor in the sewage treatment, with specific quality control standards spelled out in the contract.

“Public utilities here have shown themselves to be inefficient, unable to make the needed investments at the speed the population demands,” said Grael, an accomplished sailor whose two brothers are both Olympic medallists in the sport.

Briard, Rio’s utility president, rejected arguments that his company had failed. He said ongoing infrastructure investment had boosted treatment of the city’s sewage from a lacklustre 11 per cent in 2007 to 51 per cent currently.

Briard said CEDAE’s goal was to get to 90 per cent treatment, but declined to provide a timeline.

“Water, I sometimes joke, we could even put on the moon,” he said. “But sewage is complex engineering.”

Rio Mayor Eduardo Paes has been less forgiving. While he points to ongoing improvements _ last week he inaugurated a new sewage treatment plant _ he says the city missed a great opportunity to modernize.

“It is a shame. And not just for the city of Rio de Janeiro,” Paes said last week. “It’s a national shame.”

Briard downplayed the accomplishments in Niteroi, saying Aguas do Brazil piggybacked on work already down by CEDAE, such as development of a subterranean network of pipes. He also said that for nearly a decade the company didn’t pay CEDAE for the water it provided, allowing it to make investments that wouldn’t have been possible otherwise.

“If you don’t pay for your raw material, or if you pay very little for it, it’s clear your chance of being a success is very high,” Briard said.

Global experts say that privatization is not always a solution. While historically public water utilities have tended to be hampered by inertia and slow to adopt new technologies, today some of the best sewage facilities in the world are public, said Kartik Chandran, a professor of engineering at Columbia University.

He pointed to those serving New York City, Washington D.C., Los Angeles and Seattle as leaders in the U.S., adding that stringent regulations and strict enforcement are the basis of success.

“If you look at regulations in developing countries, they are mostly the same as in the U.S. and Europe—and perhaps even adapted from that legislation—but there’s hardly any enforcement,” Chandran said.

In April, police investigators conducted a sting at several CEDAE waste treatment plants, collecting samples aimed at determining whether the facilities are just pumping raw sewage through and dumping it. Depending on the results, both CEDAE and its top executives could be handed pollution and larceny charges, the lead investigator said at the time.

Mario Moscatelli, a biologist who for decades has been the most visible face of the fight to clean up Rio’s waterways, doesn’t believe the authorities ever intended to make good on their Olympic promises.

Not providing basic sanitation has become big business, he said, referring to the allegation the company charges for services it doesn’t perform. “It’s a big official scam.”

And it’s affecting more than Rio.

While Niteroi has cleaned up its own mess, sludge is still flowing across the bay from its sister city. The two are separated by about 8 kilometres of bay water.

“It’s been getting cleaner,” said Renan Taboada, a 19-year-old from Niteroi, as he played soccer on the city’s showcase Icarai Beach, “but it’s definitely not as clean as we would like.”