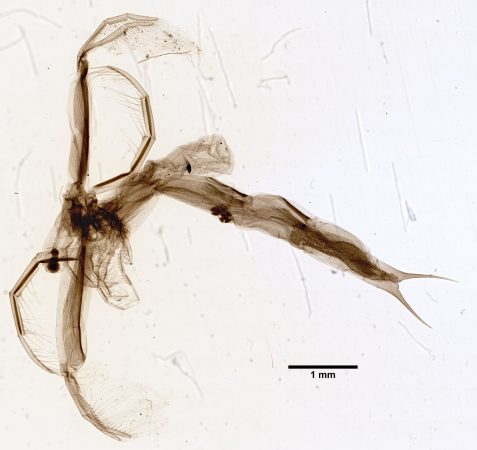 When consumed by larger and larger fish, mercury found in Ghost fleas accumulates up the food chain, resulting in a danger to humans. Photo: Yale Peabody Museum of Natural History / CC0 (PHOTO: University of Regina Communications)

REGINA, Sask. — The Faculty of Science at the University of Regina, has lead a study to understand why fish in southern Saskatchewan’s Katepwa Lake contain such high levels of methylmercury, a neurotoxin that can permanently damage brain activity in humans.

After years of research and around-the-clock water sampling, Britt Hall, a biology professor in the Faculty of Science who lead the study, found that the high levels of methylmercury are caused by large water fleas called Leptodora, or “Ghost fleas”.

Hall, whose research focuses on how mercury moves in the environment, worked with data that Peter Leavitt, a professor of limnology at the U of R, began collecting 23 years ago. The pair, along with other U of R researchers, published their findings in a recent paper “Mercury Elevator in Lakes: A Novel Vector of Methylmercury Transfer to Fish via Migratory Invertebrates“.

“Prairie lakes, such as Katepwa, are productive — meaning they contain lots of nutrients that allow algae to grow, typically diluting the methylmercury and resulting in a lower level in fish,” said Hall in a prepared statement. “But in Katepwa Lake, the data was showing that methylmercury concentrations are actually quite high and we didn’t know why that was.”

Hall’s study found that the Leptodora, a large water flea, migrates up from the mercury-rich sediments at the bottom of the lake at night to feed near the surface of the water, transferring the methylmercury to fish when they are eaten. They carry mercury in a way that is similar to an elevator carrying people from ground level to their offices or apartments on upper floors.

According to the research, this feeding boosts the amount of toxin in the fish, which are in turn eaten by larger and larger fish, resulting in a bioaccumulation of mercury when humans consume the fish.

“Leptodora are very interesting creatures,” said Hall. “They’re big for water fleas, about 1.7 centimetres long and almost completely clear. They developed a lack of coloration as a prey-avoidance mechanism, because if they’re clear, it’s difficult for their hunters to see them.”

Hall is now working with two graduate students with their research focusing on Saskatchewan wetland ponds and how they are affected by climate change. According to Hall, they are looking at how carbon influences methylmercury production and identifying the bacterial communities in wetlands to determine what sort of organisms are there that are transforming mercury to methylmercury.

“Our wetlands are so responsive to climate change, what I want to know is how factors such as temperature and precipitation impact methylmercury production in wetlands,” said Hall.