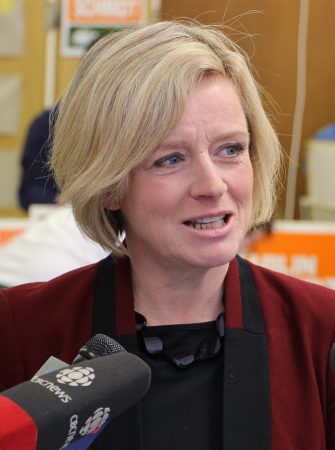 EDMONTON – Alberta Premier Rachel Notley says a court decision striking down the approval of the contentious Trans Mountain pipeline expansion is a national crisis – and she’s pulling her province out of the federal climate plan until Ottawa fixes it.

Notley also says her government hasn’t ruled out acting on legislation it recently passed allowing it to cut oil flows both east and west to drive home the importance of Alberta’s bedrock industry to the rest of Canada.

“Albertans are angry. I’m angry,” Notley told a news conference at the legislature Thursday night. “Alberta has done everything right and we’ve been let down.

“The current state of affairs in Canada right now is such that building a pipeline to tidewater is practically impossible.”

Earlier Thursday, the Federal Court of Appeal overturned Ottawa’s approval of the pipeline, which would have doubled the line from Edmonton to the B.C. coast and tripled the amount of oil shipped to fetch a better price on overseas markets.

The panel of three judges cited lack of consultation with Indigenous groups and that the regulator, the National Energy Board, failed to address the impact on marine traffic.

Trudeau said on Twitter he spoke with Notley on Thursday and “reassured her that the federal government stands by the TMX expansion project and will ensure it moves forward in the right way.”

Notley called on the Trudeau government to appeal the decision to the Supreme Court; properly consult with Indigenous peoples; and, recall Parliament. She said the federal government needs to pass emergency legislation making it clear that the National Energy Board does not have to inquire into marine shipping impacts as part of its mandate, and never had to do so in the case of Trans Mountain.

“The time for Canadian niceties is over,” said Notley. “We are letting other countries control our economic destiny. We can’t stand for it.”

“If the federal government acts boldly and gives this crisis the attention it deserves, construction can restart early in the new year.”

Until then, she said Alberta is pulling out of the national climate plan, meaning the province won’t agree to raise its current price on carbon from $30 tonne to $40 tonne in 2021 and $50 a tonne by 2022.

She said Alberta’s current provincial climate plan – including its homegrown carbon tax, a commitment to phase out coal-fired electricity along with other green initiatives – will stay in place.

Earlier this year, in an escalating dispute with the B.C. government over Trans Mountain, Notley’s government passed sweeping legislation allowing it to intervene in the marketplace and restrict oil flows if necessary to maximize prices while also sending a sharp message to Canadian regions reliant on Alberta’s oil.

Notley said Thursday she has not ruled out turning down the taps.

“We’re going to see how things unfold over the next little while, and we look at the degree of attention that this receives from the federal government,” she said.

The Trans Mountain pipeline has dominated Alberta politics in the last year and it, along with everything it represents – including Alberta’s carbon tax – is expected to overshadow all other issues in the spring election.

The pipeline is also a financial lifeline for Notley’s government, which has been running multibillion-dollar deficits while avoiding introducing a sales tax or making significant cuts to the budget.

Notley’s government has budgeted for increased pipeline access to drive non-renewable resource revenue to more than double to $10.4 billion by 2024 to balance the books.

Earlier in the day, Kenney told reporters in Calgary that the judges who overturned approval for the Trans Mountain pipeline expansion are out of touch with the real world.

“They keep moving the goalposts on what is required,” said Kenney. “This is what is creating massive investor uncertainty.

“I think (judges) sometimes they write these decisions in an academic bubble not realizing the real-world consequences.”

Kenney said Notley has not helped matters by prematurely celebrating the construction of the pipeline while imposing a carbon tax in the mistaken belief it would provide so-called “social licence” that would persuade environmental opponents to stand down.

Political scientist Chaldeans Mensah said the ruling is a setback for the political fortunes of the NDP, which has been trailing the United Conservatives in opinion polls.

“This will certainly build into the narrative from the Conservatives that the idea of social licence, which was part of the NDP push on the issue, has not borne fruit,” said Mensah of MacEwan University in Edmonton.

Political scientist Duane Bratt said that while Notley cannot be faulted for the court decision, it’s still a political victory for Kenney.

“This is a major blow for Notley,” said Bratt, with Mount Royal University in Calgary.

He said Notley not only needs the pipeline, but requires substantial progress on it in time for the election campaign.

“Whether (the federal government) appeals to the Supreme Court or whether they simply do the modifications recommended by the Federal Court of Appeal, both of those take time,” said Bratt. “And Notley’s out of time.”