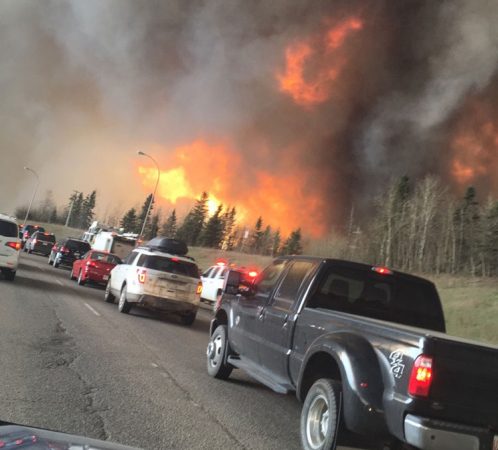 EDMONTON—A report into the Fort McMurray wildfire cites critical communications breakdowns as the fire swept into the municipality and forced thousands to flee.

Independent consultants that produced the report for the province noted that in the early days of the fire in May 2016, the two crews battling the blazes were operating through different command centres.

Communication broke down when one crew chief realized the fire would enter Fort McMurray, but failed to inform crews in the Regional Municipality of Wood Buffalo.

The municipality had to learn from social media that the fire was entering the community.

“It was unfortunate that someone had to learn about events on social media, I would agree 100 per cent,” Agriculture Minister Oneil Carlier told a news conference Thursday night.

“The report recommends communications could have been tighter and I would agree.”

The Alberta government commissioned reports from two independent consultants to examine firefighting and emergency response efforts into the wildfire that destroyed thousands of homes and businesses and forced almost 88,000 people to flee north and south for a month in May 2016.

In response to the communications problem, the province is implementing a new integrated communications system over the next five years. In the interim there are procedures to work around those gaps by, for example, uploading maps to IPads.

“We’re trying to make sure we can roll it out as quickly and as efficiently as we possibly can,” said Municipal Affairs Minister Shaye Anderson.

“(In the meantime) we’re using all the tools in the toolbox. Regardless if it’s social media or if it’s radios or cellphones or whatever it is, we have to work with what we have right now.”

The report from consultant MNP said the fire was complex, with shifting winds changing the situation rapidly.

The report said it would have been helpful if there had been an air tanker group at the Fort McMurray airport as the fire grew, but said it was understandable given the other fire dangers in the province.

It said the focus on fighting the fire allowed other priorities to lag.

“There is limited evidence that contingency plans were being developed and implemented during the first 36 hours aimed at providing opportunities to contain or minimize damage as the wildfire approached the community,” stated the report.

Wildrose Leader Brian Jean, who lost his home in Fort McMurray during the fire, reiterated his call for a public inquiry.

“This is a damning report. We need a judge-led public inquiry. Those who lost everything deserve answers,” Jean said on Twitter.

KPMG made a number of recommendations, including clarifying and documenting how to delegate authority in emergency situations. The province is now reviewing that process.

KPMG said residents in Fort McMurray struggled with mixed messages when they were forced to flee May 3. A news conference at 11 a.m. that day told them an evacuation was “a long way off,” but just hours later they were forced out on little notice.

The report said social media, neighbours running to inform and help out others, and those sharing space in their cars and trucks with strangers to get out was critical.

“Ultimately, the success of the evacuation during the wildfire was largely due to the young demographics of the community, and how the community rallied together,” said the report.