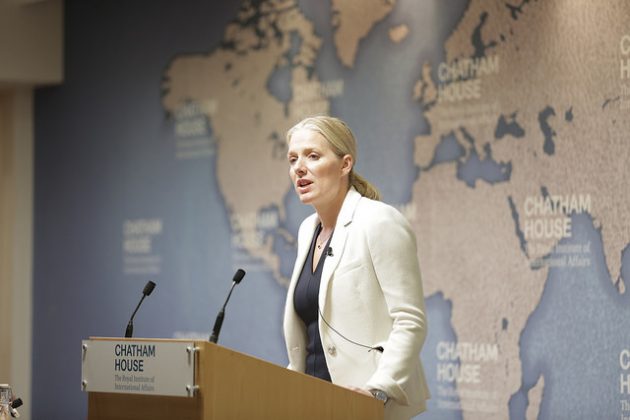 HALIFAX – Ottawa used the platform of a G7 ministers meeting Thursday to announce it will gradually eliminate most plastic waste from government operations, as corporate leaders spoke of how they’re eager to turn waste into profitable material.

Environment Minister Catherine McKenna said at the Halifax gathering that the federal government will ditch unnecessary plastics throughout its operations.

She said Ottawa aims to collect, reuse or recycle at least 75 per cent of its plastic waste by 2030.

Meanwhile, the CEOs of a number of large companies said they’ll sign the ocean plastics charter that Canada has been promoting.

The Canadian-led plastic charter’s provisions call for national governments to set standards for increasing the reuse and recycling of plastics rather than trashing them.

It also calls for businesses to take responsibility for production methods that eliminate waste – an approach referred to as “extended producer responsibility.”

Five of the seven G7 nations and the European Union signed on to the charter at the recent G7 leaders summit in Charlevoix, but the United States and Japan still haven’t endorsed it.

McKenna announced Thursday that Jamaica, Kenya, the Marshall Islands, and Norway are signing on to the plastics charter.

Also Thursday, a group of companies and non-government groups announced a coalition dedicated to finding ways to use plastic rather than throwing it away.

Some firms, including Ikea, have already promised to eliminate single-use plastic products from its shelves by 2020, including straws, plates, cups, freezer bags, garbage bags and plastic-coated paper plates and cups.

There have been a wide array of corporate anti-plastic pledges in recent months: hotels including the Marriott and Holiday Inn Express have dumped their complimentary tiny shampoo and conditioner bottles in favour of larger containers that are attached to the bathroom wall.

Montreal became the largest Canadian municipality to ban single-use plastic bags this week, and Prince Edward Island is gearing up to become to the first province to do the same.

Paul Polman, the chief executive of Dutch-British multinational Unilever _ a massive consumer products firm – attended the morning session of the G7 meeting and told the ministers those that haven’t signed on are falling behind a world trend led by consumers.

He referred to the Canadian-led ocean plastics charter as a starting point for all nations to commit to.

“You’ve put a stake in the ground of what the minimum is that the whole world should adhere to, even though I realize there are some countries still hesitating to sign,” he said.

“I can only tell you, you’re out of line of where the consumers are.”

He said people around the world want to help end the flow of plastic into the oceans, in part because of powerful images of sea life that is dying due to swallowing plastic waste being dumped into water.

McKenna also said during her news conference that Ottawa is starting a $12 million fund for innovations in plastics aimed at finding ways to avoid the material entering the waste stream.

However, McKenna has said the Liberal government’s wider approach to setting out a national strategy to reduce plastic waste and encourage reuse is still being worked out, as she plans to meet with provincial counterparts.

Mark Butler, the director of Halifax-based Ecology Action Centre, said while the voluntary commitments of companies and the international charters are useful, stronger legislation is needed to eliminate throwaway plastics and commit companies to recycling and reuse.

“Voluntary is great, but we need mandatory,” he said. “The basic approach is if it can’t be recycled, we shouldn’t be using it.”

Butler also said there are still serious problems with the ocean plastics charter, including its use of terminology that would allow for plastic waste to be burned – thus contributing to greenhouse gases.

As he prepared to depart Halifax, Andrew Wheeler, the head of the Environmental Protection Agency, said the United States intends to follow its own domestic plans to reduce plastic waste.

“As I said in the meeting today after the press left, we have to be aware of the fact that 60 per cent of the plastic waste comes from five countries that are not represented by us,” he said in an interview.

“The G7 needs to do a better job of outreach to those countries if we’re going to solve this problem internationally.”

Masaharu Nakagawa, the Japanese minister of the environment, declined a request for an interview on why his country is not signing the plastics accord, but signalled the matter will be discussed further at the G20 meetings.

He said in a speech earlier in the day that Japan is currently considering a domestic strategy referred to as the “plastic resource circulation strategy,” and this new strategy will include the points listed in the Ocean Plastic Charter and “aims to be even more ambitious.”