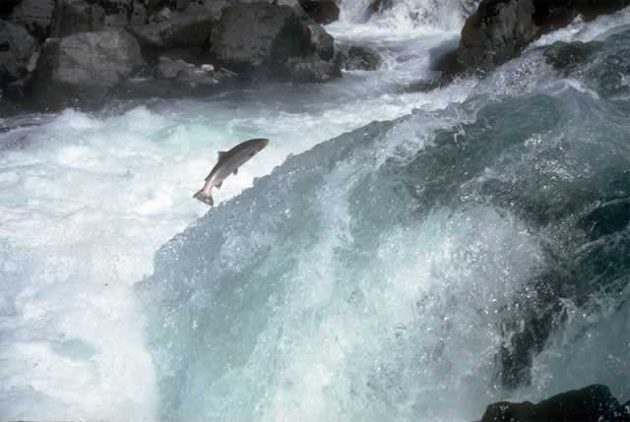 The extinction of upper Fraser salmon species could result in economic losses throughout British Columbia.

Ottawa is seeking help to avoid what it says could be the extinction of some British Columbian salmon species because of a massive landslide on the Fraser River that sparked a co-ordinated emergency response this year.

Public Services and Procurement Canada, on behalf of the Department of Fisheries and Oceans, issued a request for information this week seeking input from the private sector and other experts to re-establish natural fish passage at the site of the slide.

The Big Bar landslide north of Lillooet, B.C., was discovered in June and initial estimates show 75,000 cubic metres of material was deposited in the river.

The government documents say the request will only be open until Dec. 6, given the “urgency” of the situation, and Ottawa is prepared to spend between $10 million and $30 million on the project.

It’s seeking construction and environmental remediation work to support the break up and removal of rock from the site of the slide during the first available low-water window between December and March.

The documents say the extinction of upper Fraser salmon species could result in economic losses throughout British Columbia and pose risks to the food security and culture of many Indigenous communities along the river.

The slide occurred in the traditional territory of the High Bar and Stswecem’c Xgat’tem First Nations but the government says an additional 140 First Nations may feel the effects.

“Without immediate environmental remediation, many salmon stocks native to the upper Fraser River (a large geographic region of BC) may become extinct,” the document says.

The Department of Fisheries and Oceans says in a statement that it’s still crunching numbers around the fish migration, spawning and mortality data due to the slide.

It could take years of work to reduce the impact of the slide on salmon stocks, it says.

Following the slide, the federal, provincial and local governments worked with local First Nations through a joint command centre to move the fish beyond the barrier, including transporting thousands of fish toward spawning grounds by helicopter.

While some of the slide material has eroded or moved downstream by freshet flows, the largest slide fragments remain in the area “critical” to fish passage, the request for information says.

Work on the project depends on low water levels and the work must be complete before levels rise, which historically happens around March 15, it says.

“Given the unique and specialized nature of this work, remote location, low water window and less than favourable weather conditions, Canada is seeking input for the industry regarding timely and effective solutions, associated procurement strategies as well as any other meaningful feedback it may have to offer in relation to this requirement,” it says.

Interested bidders are encourages to engage with local First Nations and the government is specifically seeking input form Indigenous businesses.