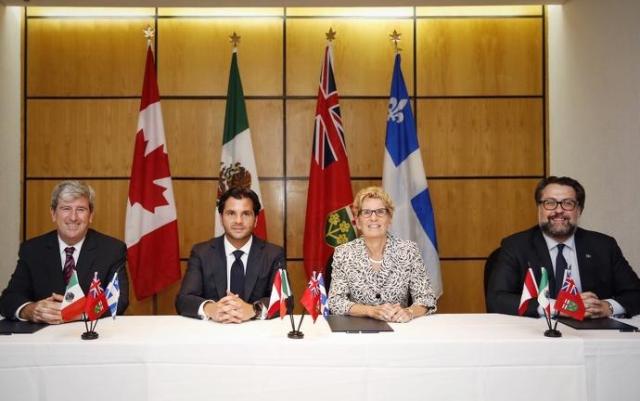 Though the agreement has no immediate concrete implications, the trilateral declaration will see the two Canadian provinces and Mexico share their expertise on carbon markets with one another, as well as exchange other opportunities to reduce greenhouse gas emissions.

“This milestone declaration will boost cooperation between our three regions and drive the reduction of carbon emissions across North America,” Wynne said.

One of the leaders in cap and trade policy, Quebec makes up one half of a carbon market under the Western Climate Initiative alongside the U.S. state of California. Not far behind, Ontario passed a cap and trade bill earlier this year and will join the two other jurisdictions at its first carbon auction next year.

Mexico, meanwhile, is preparing to pilot the concept. The country plans to introduce a smaller-scale carbon market this fall.

The policy deal was signed in Guadalajara, Mexico—one stop on the Ontario premier’s economic mission to Mexico.