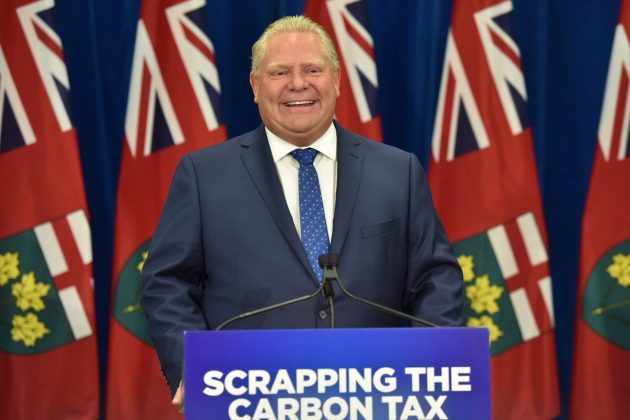 MILTON, Ont. – Premier Doug Ford says his government will remove the cost of the now-repealed cap-and-trade system from natural gas bills, but opposition critics say the Tory government is not telling people the true impacts of cancelling the system designed to fight climate change.

At an announcement hosted by a Milton, Ont., diner, Ford touted the change, saying it will save families $80 a year and small businesses will save $285 annually.

The government has issued a directive to the Ontario Energy Board that will see the price of natural gas reduced by 3.3 cents per cubic metre starting on Oct. 1.

“We’re going to lower the cost of natural gas for all Ontario families and businesses,” he said. “That’s money that will stay in your pocket.”

The newly-elected Tory government cancelled cap and trade last month and has launched a court challenge of Ottawa’s ability to impose a carbon tax on the province.

Shortly after winning the spring election, Ford said his government would provide clear rules for an “orderly wind down” of cap and trade.

The premier has said that cutting the carbon pricing system will help him lower gasoline prices for vehicles by 10 cents per litre.

Ontario’s cap-and-trade system aimed to lower greenhouse gas emissions by putting caps on the amount of pollution companies in certain industries can emit. If they exceed those limits they must buy allowances at quarterly auctions or from other companies that come in under their limits.

The province has made close to $3 billion in a series of cap-and-trade auctions since the system was introduced by the Liberals last year. Ford has consistently opposed carbon pricing and has come under fire for failing to explain how he would make up for the lost revenue.

While the program’s 272 participants bought the allowances, Ontario’s environment minister has said only those that purchased more than they used while the program was still active, and were not able to recover those costs from consumers, will be eligible for compensation.

The government expects to spend up to $5 million to compensate companies.

Ontario NDP environment and sustainability critic Ian Arthur called the news a “re-announcement” of cancelling cap and trade. The move will actually mean the Ford government has to cut millions in funding intended to repair schools and build affordable housing, he added.

“It means families and businesses will lose out on green energy retrofits that would have brought real relief to monthly bills and put actual dollars in their pockets,” he said in a statement. “And cancelling cap-and-trade and ripping up hundreds of contracts means taxpayers could be on the hook for billions of dollars in penalties.”

The Green Party said Ford is misleading Ontarians by jumping to a “cut first, think later” approach to governing. Cancelling cap and trade could have long-term financial consequences to the province because it refuses to adequately compensate companies that bought allowances under the system, opening the province up to lawsuits, a party statement said.

“The premier is underestimating the costs of abruptly scrapping pollution pricing without an orderly phase-out,” said Stacey Dancker, the party’s finance critic. “He has declared victory before we know the legal fallout of denying companies compensation on the $2.8 billion in worthless pollution permits.”