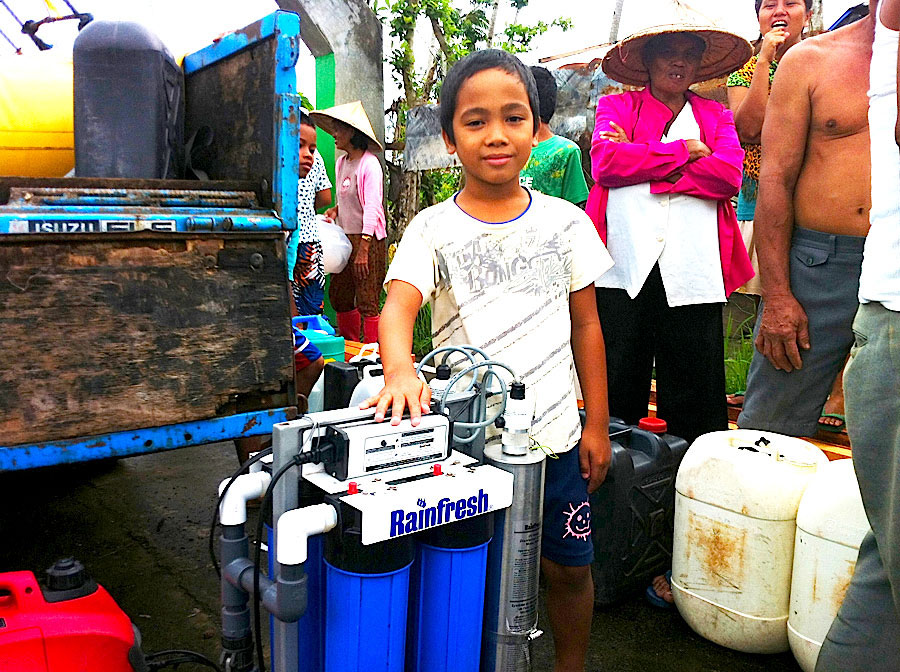 A Filipino boy with an AquaResponse unit after Typhoon Haiyan hit the Philippines in November 2013. The system purifies enough water to supply 20,000 people with safe drinking water daily. PHOTO Envirogard

Working with disaster response and relief program GlobalMedic, Envirogard Products Ltd. earlier this month sent hundreds of its water filters to the Southeast Asian island nation to help deal with the fallout from a severe tropical storm that killed at least 21 people and saw more than one million residents evacuated.

“These units are a a life saver to families,” GlobalMedic director Rahul Singh said of Envirogard’s gravity water filters. “They (give people) clean water and a sense of water security. They can focus their attention to rebuilding the house and recovering. The unit lasts long enough to get them over them hump and return to some form of normalcy.”

According to Vikhas Thusoo, co-owner, product manager and technical specialist with Envirogard, the decision to get involved in the relief efforts in the Philippines was an easy one to make.

“We found that there was a need for advanced, reliable yet simple technologies that could be mobilized into disaster areas within a short span of time,” he said. “We felt that we could make a measurable difference by leveraging our ability to innovate and customize specific products for disaster relief to bring tangible and fast relief to survivors. It also helps us achieve our corporate social responsibility goals.”

According to GlobalMedic’s Singh, the Envirogard water filters, among the only gravity-style units endorsed and certified by UNICEF, meet “a critical need” for families and residents in disaster-hit regions, providing drinkable water from even the most contaminated of sources.

“Think of the family that is affected,” he said. “The storm rips through their village and rips their roof off. Their water source is contaminated and their livelihood is likely diminished. By giving them a (product) that provides a longer-term solution and provides them clean drinking water right in the home is priceless.”

For a combined cost of about $65 to purchase and transport each water filter—Envirogard sells the units to GlobalMedic “at rate considerably lower than the Canadian retail” price, the agency director said—the cost works out to be about $13 per person per year to have clean drinking water, according to Singh.

“Can you imagine the double whammy of having lost everything and then having your four year old child becoming ill with cholera?” he asked. “You lose what little savings you may have to pay for medical care. Parents can’t work as they need to care for an ill child. The problem compounds itself.”

In just a few hours, according to Envirogard’s Thusoo, a gravity filter can provide as much as three litres of safe drinking water from virtually any source without the use of electricity or pressure.

“It is very easy to use, chemical-free, compact and long lasting,” Thusoo said. “It is simple and easy to maintain, ensuring a reliable and consistent supply of safe water.”

After purchasing the Canadian-made filter kits from Envirogard, GlobalMedic sends what Singh calls “the guts” of the units to the disaster-hit region, where they are matched with locally-sourced buckets, put together and delivered to those in need.

Singh said training sessions are held to teach people how to operate, clean and maintain the units.

According to Singh, GlobalMedic and Envirogard have been able to deploy 3,220 of the latter’s Rainfresh units to the field over the years.

Envirogard also makes a larger AquaResponse unit that can be flown into disaster zones with first responders, converting contaminated water from sources like pounds or rivers into as much as 100,000 litres of drinking water in a single day.

“That is enough to satisfy the water needs of an entire community,” Thusoo continued. “Custom-built for disaster relief operations, these lightweight systems use a triple-stage treatment design and can be easily transported to various communities to deliver safe water.”

The latest work between GlobalMedic and Envirogard marks the second time the two have hooked up for disaster relief in the Philippines within the last 13 months, and Thusoo said it can be a tough situation to enter.

“I don’t think there’s anything that can prepare you for the devastation that you see on the ground,” he said. “In (the) Philippines, for example, there was not a house in sight that was not either partially or completely destroyed by the typhoon.

“Destruction was everywhere. The water infrastructure had been severely impacted and clean water was a major issue. Along with the aid team, we drove to various communities every day with an AquaResponse unit, where hundreds of people would gather and collect safe water for the day. In other communities we distributed thousands of gravity water filters … You get a new perspective when you see the optimism of the survivors despite their loss and to see first-hand the positive impact that our products make in their lives is extremely satisfying.”

Having worked with GlobalMedic for more than 10 years in disaster situations throughout Africa, Asia, Latin Ameria, the Middle East and Caribbean, Thusoo encouraged other Canadian companies to get involved in similar efforts.

“If you want to get in, do it for your heart, not the bottom line,” Thusoo said. “It’s very satisfying to see the difference your products will make in the lives of the survivors. Adaptability, fast response and low cost is the key.”

GlobalMedic’s Singh echoed his sentiments, and said it is something more Canadian companies should be doing, and he is encouraged by another Ontario-based company has worked with GlobalMedic to provide disaster relief in the Philippines.

Aeryon Labs Inc. of Waterloo, Ont., donated an unmanned aerial vehicle (UAV) and trained several of the organization’s responders in order to provide an extra set of eyes on the ground.

The UAV will be used to locate people in need of aid.

“The GlobalMedic team needs to be able to make decisions and respond to disasters … quickly,” Aeryon Labs president and CEO Dave Kroetsch said. “They need to know where the roads are flooded, neighbourhoods are gone, and people have migrated to different areas for food or shelter.”