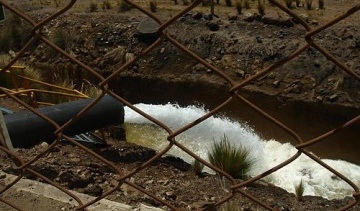 Authorities have called for improvements to Tijuana’s decrepit sewage system.

SAN DIEGO—A binational commission can’t determine how much sewage spilled into the southwestern corner of the United States from Mexico from aging infrastructure in the border city of Tijuana.

The International Boundary and Water Commission said Mexican authorities reported 28 million gallons (106 million litres) spilled from Feb. 1-4 during a repair to Tijuana’s sewage system, far less than 143 million gallons (541 million litres) initially reported. But the report found that an unknown additional amount of sewage spilled from other sources such as blocked or collapsed pipes in Tijuana and sewage overflow during heavy rains.

“It is difficult to determine the exact flow since it was not directly measured,” according to the commission, which addresses border disputes over water and other issues.

The report said investigators couldn’t pinpoint the source of foul odours that infuriated residents of the city of Imperial Beach and other San Diego suburbs throughout most of February and caused beaches to close.

The commission said the episode highlighted the need for better communications between local officials on both sides of the border, better data collection and for improvements to Tijuana’s sewage system.

Under an 1848 treaty, the Tijuana River crosses the United States for a few miles through a valley before flowing into the ocean. During high tides and when sewage is heavy, residents say foul-smelling water fills an estuary.

Cross-border sewage has long been a sore topic in Imperial Beach, a city of about 30,000 that draws surfers and families looking for relatively affordable homes near the beach. Spills of more than 10 million gallons (38 million litres) a day were common.

A U.S. plant that was completed in the 1990s—combined with improvements to Tijuana’s system—alleviated the problem, but the latest spill was a reminder that infrastructure is woefully inadequate. Spills of 1 million gallons (3.8 million litres) or more are still considered routine.