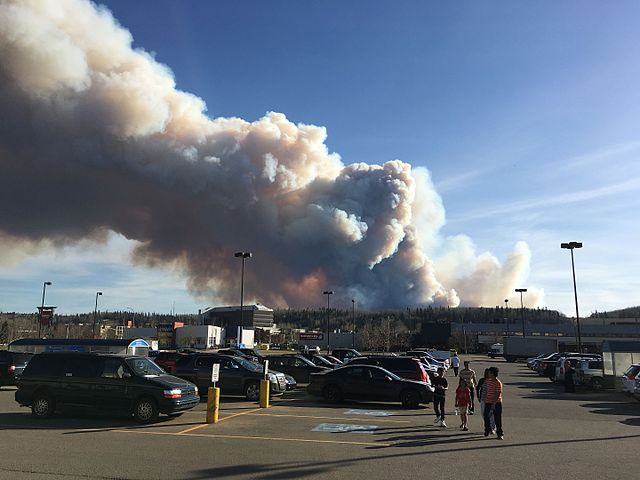 More than 80,000 residents were evacuated from Fort McMuray this year as a wildfire claimed about 10 per cent of the city. PHOTO: Jason Woodhead, via Flickr

OTTAWA—A new government report says that by the end of this century a changing climate is expected to at least double the area burned each year by forest fires in Canada.

The 2015 annual forest assessment by Natural Resources Canada says a warming climate will contribute to a 50 per cent increase in large fires, new tree diseases and more insect infestations.

“Climate change is gradually imposing an increasing trend on forest fires, a trend that is partially masked by the large variability of this disturbance,” says the report.

The study builds on a body of scientific evidence that became politically charged last May when a massive wildfire forced the evacuation of the northern Alberta oilsands hub, Fort McMurray.

The Fort McMurray fire ended up covering almost 590,00 hectares of boreal forest and is expected to total more than $3.5 billion in insured losses, the largest such insurance loss in Canadian history.

Scientists say it is difficult to link any single natural disaster, such as a flood or fire, to man-made global warming, but that the frequency and intensity of such events has been increasing and is likely to continue, especially in a northern latitude country like Canada.

“The State of Canada’s Forests” report, released last week, notes that even if international efforts are successful in limiting global warming to two degrees Celsius above pre-industrial levels, that increase translates into a four-degree Celsius increase for Canada.

Steve Taylor, a Victoria-based research scientist at NRCan’s Pacific Forestry Centre, said in an interview that it is now “well accepted” in the small scientific community that studies forest fires that a warming climate will lead to more fire activity, but with great regional variations and differing impacts depending on fire management.

A warming climate needs to combine with changes in rainfall, ignition sources and high winds to create conditions for the really big fires.

Wildfires of “Fort McMurray proportions,” he said, have happened perhaps 40 times over the past 30 years—but that’s out of some 150,000 forest fires during the same period.

“There is some background frequency of which a six will come up. But if you load the dice—like you might be doing with climate change—you have to (roll) it many, many times to see if you get sixes more often.”

The 2015 assessment found that a total of 7,068 forest fires burned about 3.9 million hectares. The number of fires was slightly above the 10-year average, but the area burned was 50 per cent higher. Forest fires forced the evacuation of 125 communities affecting about 15,000 people in 2015.

“We don’t want to say necessarily the sky is falling, but it should motivate some concern and activity,” Taylor said of the latest forest report.

“We’re in the fortunate position of being able to look ahead and think about how to better prepare over the coming decades to reduce the impacts.”